The blizzards of Des Moines 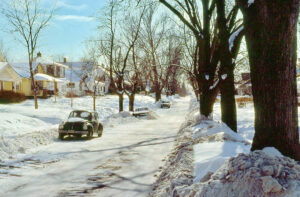 As I write this on the afternoon of Dec. 20, my phone is blowing up with warnings of the upcoming blizzard that is forecasted. The temperature has dropped significantly in recent days, and it feels more like the middle of January, less the anticipation of holiday festivities.

As of right now, I donât know if this forecast will become the real deal or not. By the time you are reading this, the truth will be told.

Back in 2012, or maybe even 2013, I remember an ice storm that hit Des Moines with the entire city having a glaze over it. I was a moron and went cruising around, and, thankfully, there was enough snow packed on the ice to help maintain tire traction. I canât handle cabin fever.

Years later, during the first polar vortex (at least that I remember being reported), I drove overnight to central Texas to shoot a documentary. It was so last minute that I think I got the call at noon that schools were canceling for the next day. While driving overnight, I was hearing all sorts of reports from news agencies telling people to hang blankets over their windows and that frostbite will take place if your skin is exposed for more than five minutes.

Jeanie Red had just moved from western Iowa a few months before the famous blizzard of 1961. 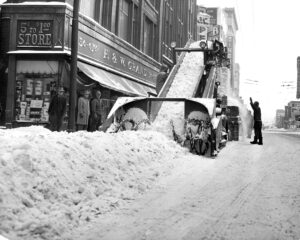 âI was working downtown Des Moines and living in the east side with three other girls. My roommate, who worked at Mercy Hospital, picked me up, and we headed home about 5 p.m. For hours, we struggled against blocked roads and traffic jams. Visibility was so low that we didnât see the giant drift across the road in front of us until we were stuck in it. It was dark, it was cold, and the wind was howling. There was no way we could stay in the car, so we trekked through the snow to a light we could see ahead. I donât know what the people in the house thought when we knocked on their door, but they were kind enough to put us up for the night and help us dig ourselves out in the morning.â

âMy wife and I had just gotten to work that morning downtown when we were then told to go home. Everything was shutting down. So, I picked her back up with my bossâ car because I had already taken off my snow tires. We lived in Clive at the time. We got stuck on the freeway and, fortunately, a man in a Jeep got me going again. We made it to the 86 Street exit, then that was it. We couldnât go any further. Another man in a four-wheeler stopped and gave us a ride. Unfortunately, he was heading to West Des Moines, so he dropped us off at the gas station across from the old Dahlâs on Grand in West Des Moines. By now, everything was coming to a standstill. Even the plows were getting stuck. A man at the station helped me get my wife across the street to Dahlâs. Did I mention that she was eight months pregnant? Thatâs where we spent the night. At least they fed us and made her as comfortable as they could.â

JD Larson, who has contributed photography to this column, sent me a photo that was taken by his dad, John Odden Larson.

âA blizzard hit Des Moines in early 1979 and, for one reason or another, my dad decided to take photos to document it. This is 45th Street looking south toward Kingman Boulevard and our house, 1115, would have been to his left. Itâs that Volkswagen that makes the scene, a true reflection of what an average street would have looked like during this era when those Beetles were everywhere,â Larson shared.

I work with a lot of people from California. Many of those folks are former Iowans who moved there to work in the entertainment industry in some fashion. A lot of these folks grew up in the rural parts of the state and learned to handle dangerous or even life-threatening weather. Now their bodies have grown soft and canât handle anything below 50 degrees. To put it all in perspective, I was walking around in short shorts in 37-degree, wet and rainy weather. Living in a state where the weather is trying to kill you five months out of the year makes you feel alive in a way you never thought possible. ♦