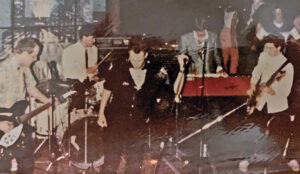 The Law performing in Omaha 1981

When I started my radio show âIowa Basement Tapesâ in July of 2018, I set out to research and preserve Iowaâs punk rock and counterculture history. Over the last four years and more than 200 consecutive episodes, I am still finding new bands and people who were influential on punk rock in our state.

In 1981, âThe Decline of Western Civilizationâ was released. It was a documentary about the rising punk rock scene in Los Angeles from December 1979 through May 1980. The film was directed by Penelope Spheeris (who went on to direct âWayneâs Worldâ and âThe Little Rascalsâ) and featured bands like The Germs, Black Flag, The Fear, X, and Alice Bag. This music was new and exciting. 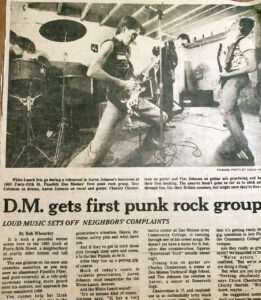 The opening interview was with a young punk concertgoer who said, âThatâs stupid, âpunk rock.â I just think of it as rock ânâ roll, because thatâs what it is. â¦ Itâs something new, and itâs just reviving old rock ânâ roll. Itâs raw again, and itâs for real. There are no rock stars now.â

The Des Moines Register published an article in 1977 with a headline of âD.M. Gets First Punk Rock Groupâ and included the sub-title âLoud Music Sets Off Neighborsâ Complaints.â The article was about the band White Lunch, which featured Aaron Johnson on vocals and guitar, Eric Coleman on drums, and Charlie Chesterman and Tim Johnson on guitar.

Mac Stanfield was a teenager at Roosevelt High School in 1978. He was your average kid whose older brother just happened to be friends with Chesterman. In the mid 1970s, they had a band together called The Flashbacks, a 1950s cover act. After White Lunch dissolved from its short life (although the band did make a live TV performance on âThe Mary Brubaker Showâ in 1977), Chesterman wanted to do something with similar punk energy. Mac Standfield was a just a sophomore but wanted to be part of this new thing that Chesterman was putting together.

âI pestered Charlie over and over that I wanted to be in his band until he finally relented,â Standfield said.

The original lineup of this new band was Tad Hutchison (AKA Bolt Upright) on drums, Kevin Hensley (AKA Billy Disease) on saxophone and organ, Tim Johnson (AKA Tim P. The Very Dangerous) on guitar, Chesterman (AKA Chuckie Suicide) on guitar and vocals, and Stanfield on bass. They became The Law. Standfield, Hutchison and Hensley were still in high school. Johnson and Chesterman had graduated.

âIn 1978-79, there really wasnât any original music going on, except for the bands Roze and Luxury,â Standfield said. âThe rest were all cover bands playing at the clubs, which is fine because the other gigs were high school dances. The Law was playing in peopleâs backyards and parties. In fact, many of them were on Foster (Drive) in the South of Grand neighborhood, because thatâs where some of the kids from Roosevelt lived.â

The legal drinking age was 18 then, and a bar called The Timber Tap was owned by a guy who was a senior at Roosevelt, according to Standfield. He said it was a dive, but it had a stage. The Law would play there, and the high school kids would come out.

Another legendary Des Moines bar, Soâs Your Mother, was across the street. It was previously more of a hard rock biker bar, but ownership changed in 1980 and wanted to try something new, so they invited The Law to play.

One of the most interesting pieces of The Lawâs history was when Chesterman began throwing large multi-band shows called âMusic For No Manâs Land.â The Law would headline, and they would have four to five other bands play on the same night, including A Testament of Youth (ATOY), The Young Executives, and Political Vomit. They even put out a compilation cassette of one of the shows with all the bands. Chesterman and his then-girlfriend Kris also published a music fanzine called âTimes Up.â

The Law never formally toured but just did road trips to Omaha, Lincoln or Iowa City to play Gabeâs and the Crowâs Nest. The band dissolved in 1981, relocated to Boston in September of the same year, and then finally dissolved a few months later after a final show in Des Moines. Chesterman stayed in Boston and formed Scruffy the Cat, which Stanfield joined in 1983. That same year, Hutchison joined Seattle-based Young Fresh Fellows, which continued on and opened Wilcoâs 2021 West Coast tour with their version of The Lawâs âMy Friend Ringo.â

And punk rock in Iowa was all the better because of it. ♦