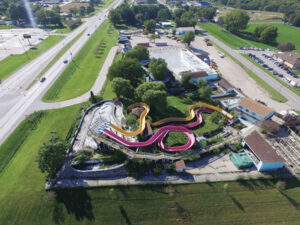 An aerial photo of the White Water University in 2016, courtesy of: AbandonedExplorers.com Â©

As a child, I would go to Wacky Waters Adventure Park between Davenport and Walcott. When I was 9 years old, a wave pool was installed. If you wanted to know what it felt like to be tumbled by large, ocean-style waves in an overcrowded pool, then you were in weirdo heaven.

This conversation takes us to White Water University in Pleasant Hill â one familyâs small âbigâ business for more than 20 years.

Craig Smith and his father originally opened the operation first known as âSmithâs Super Shootâ in the early 1980s. It was later renamed White Water University. This was Des Moinesâ first wave pool and lazy river. The attraction expanded by adding miniature golf and Iowaâs only twin-engine golf karts.

Davo Wilkins, Iowaâs first licensed body piercer, grew up on Shadyview Boulevard in the 1980s, just a skip away from where Smithâs Supper Shoot was located at 5494 E. University Ave. in Pleasant Hill.

âThey had two slides,â he remembers. âYou would pay by the hour and get a wristband. We figured out that if you showed up at 7:50 p.m., they would let you go until they closed. So, you would get an extra 10 minutes.â

The family attraction saw its last year of operation in 2005. The business reportedly brought in 120,000 customers in its final season. The reasons for closing are varied. Some say the city of Pleasant Hill wanted to put a massive tax on the water usage. Iâm not a waterpark owner, or an expert in running a business, but I do know that you canât run a successful business without your main commodity. This was also just a summer business for the Smith family, so they had to make their money in only four months. The Smiths eventually opened a haunted house on the property to capture some off-season revenue, but that was only going to do so much to offset the property taxes. Five years after White Water University closed, Adventureland opened its own waterpark just up the road.

The haunted house was the last part of the business to close, which it did in 2013 after a list of expensive improvements such as sprinkler systems made the operation too costly. Safety improvements can be steep, and sometimes the juice isnât worth the squeeze. Most any business person, whether a restaurant owner or a movie theater operator, would say the same.

After the waterpark closed, it became a tourist attraction for folks who enjoy grim nostalgia. Amateur historians and photographers flocked to the former park to take photos of the abandoned family water hole. There was a moment when the city of Pleasant Hill had been considering purchasing the property to open its own water park, but, ultimately, it didnât happen. Smith had an asking price of $3.5 million for the six-acre property.

âIt was kind of sad when my kid was little and all they had open was the mini golf and the go karts,â says Wilkins. But could the Des Moines metro support this with water parks in Altoona, Des Moines and Clive also?

The remains of this waterpark were demolished in March of 2018. The plan was to create a new development area for Pleasant Hill, making it more âsuburbanized.â When searching the address online, Burger King pops up. Have it your way.

When I operated a movie theater in Fairfield, I would go through Pleasant Hill to get to Highway 63. Driving by the White Water University site reminded me of Wacky Waters, which eventually closed and turned into a training center for the military. Not a bad idea. ♦