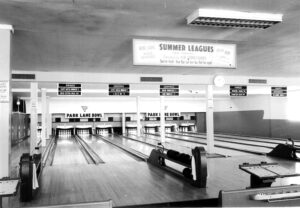 As a child, my father would drag me to Town and Country Bowling and Cocktail Lounge in Rock Island, Illinois. I remember a giant Chief Black Hawk sign in front of it. This was sometime between 1989 and 1991, when smoking was still allowed in public places. Guests would walk in the front door and immediately be introduced to a mix of neon lights and cigarette haze. An arcade the size of small bedroom was also near the entrance. I remember playing arcade games and not-so-patiently waiting for pizza while my dad bowled in his league. Many of my quarters were devoured in Michael Jacksonâs Moonwalker game in that room.

Bowling Centers are still popular. Iâve produced enough live PBA tournaments in my day to know that there is still a strong following to one of the few sports that most anyone can at least participate in and have fun while doing it.

Des Moines even had a local TV program for three decades called âLetâs Go Bowling,â which legendary Iowa broadcaster Jim Zabel hosted and some of you may remember. I canât say that watching bowling on TV is all that stimulating, but like most any sport on a screen, you can kill a six pack to it. 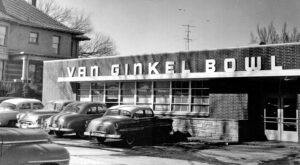 Val Lanes has been in operation since 1957 and reminds me of the bowling alley that I frequented in my youth. Bowling enthusiast JD Larsen remembers the pinball machines and some of the first coin-op video games he ever saw.

âDefender, Stargate and a very cool one I believe was called Tank. One of their old pinball machines would occasionally get a ball stuck on a scoring button and rack up points â 20 at a time. So if you could wait and conceal what was going on from the staff, you could wait it out and get enough points to earn free games.â

âThe most unusual bowling alley was on the second floor of Van Ginkelâs on Ingersoll,â says Larsen. âI have no recollection of why on Earth they had a bowling alley. It had a jukebox and was the only place I ever found that had a 45 from The Cars with a B side track titled âThatâs It.â â

Van Ginkelâs has been around on Ingersoll since 1922 and added bowling lanes in 1953. Another bowling enthusiast, Jim Sheldon, recalls time spent there.

âGot into my first bowling league at Van Ginkelâs bowling alley down on Ingersoll in the late 1960s. Then behind Van Ginkelâs on Grand Avenue was Grand Lanes. It was a little bigger, and I could have a few beers, as long as I had my ID,â says Sheldon.

I have not ventured out to bowling centers in my adult life for fun that often; however, I do have memories of going to Plaza Lanes on Douglas Avenue. I went for a couple nights of cosmic bowling with friends during my early years in Des Moines in 2007 and 2008. I wasnât part of any league, as I am the worst bowler on either side of the Mississippi. In fact, referring to my earlier story about going to Town and Country as a kid, you might have noticed that there was no mention of me bowling. I was terrible.

Plaza Lanes, one of the classic bowling centers of Des Moines, was originally built in 1957. However, as many of us remember, it tragically went up in flames in 2017. It was a bummer of a deal, and the facility was never rebuilt. Thatâs not to say that the Des Moines area doesnât have plenty of great opportunities to indulge in bowling fun: Val Lanes in West Des Moines, Air Lanes on Fleur, Gameday Lanes at Merle Hay Mall, Bowlerama Lanes on Diehl Avenue, Great Escape in Pleasant Hill, Warrior Lanes in Waukee, and Adel Family Fun Center in Adel, to name a few.

Meanwhile, I went home to the Quad Cities for Thanksgiving this year and saw the empty lot that was once Town and Country Bowling and Cocktail Lounge. The bowling alley may be gone, but the statue of Chief Black Hawk remains â and so do the memories. ♦