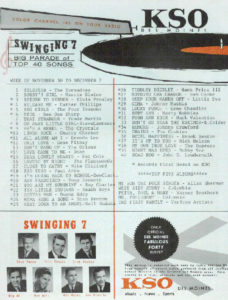 Dic Youngs got his break in radio at age 16 at 1460 KSO radio through an amateur DJ contest that he won.

I love radio. Faithful readers may recall my column earlier this year on the history of Ron Sorensen and KFMG. This month Iâm opening the history book of Iowa broadcasting on another familiar voice for many of you â Dic Youngs, âThe Oleâ Youngster.â His era was before my time in the Des Moines area, but stories of folks like him are why I love local radio and the voices we hear coming through it.

East High School student Dic Youngs got his break in radio when he was 16. Radio station 1460 KSO ran an amateur DJ contest that was put on by the stationâs program director, Dick Vance. Youngs won, and Vance hired him on KSO where he worked at night with Hal Moore (who went on to be a popular DJ in Denver). Hal would do the news for a couple hours, and then they would switch. Stations took news quite seriously back then. Youngs was young and was able to capture listeners with the top 40 hits. Youngs and Vance would sit inside their fishbowl studio on 19th and Ingersoll and let their creative minds go to work. Vance once ran a promotion for a tire company by hanging a car from a crane with Dic Youngs inside â for several days. Youngsâ mother even called the station screaming, âYou are going to kill my son!â

KSO was sold in 1964, and Youngs followed Vance over to KDMI FM. This was the early days of FM. Vance once mentioned that they had to give radios away to the sponsors so they could hear their own commercials. Hal Moore moved over to KIOA in 1966, and he took Youngs with him. It was here where Youngs would eventually start his most famous program.

Another Des Moines radio legend, Ray Dennis, first ran into Youngs at the Iowa State Fair in 1959, but they didnât get to really know each other until 1985 when Youngs gave him a call and asked to be his fill-in on âThe Original Saturday Night Oldiesâ show.

âI had already been out of radio since 1978, after being on KRNT,â said Youngs. âIt was going to be just one show, but it turned out to be 22 years and a couple hundred shows.â

In 1997, Youngs was inducted into the Iowa Rock N Roll Hall of Fame, a great honor he shared with Vance. Youngs was also responsible for 26 of the Rock N Roll Reunions at the Iowa State Fair. One of the most heartwarming moments is listening to Youngsâ final words on KIOA on his âOriginal Saturday Night Oldiesâ show on Sept. 9, 2007: âWell, it goes back to when I was 11 years old. This is what I wanted to do. You know what? I did it. I may not have done it my way, but I did it. There are so many memories and so many people to thank, but we donât have time here. All I can say, for the last time, thank you for turning me on.â Youngs passed away on Oct. 1, 2009.

We are all aware of how radio has changed, especially over the last 10 years. Every time you decide to listen to a podcast or stream music on Spotify, our local stations take a hit. Some hosts (do we now call them hosts instead of DJs? Asking for a friend) embrace these new platforms and combine them with their regular broadcasts. Andy Hall from Lazer 103.3 has his own spinoff podcast called âAndyâs Hall Pass.â Iowa Public Radio has its own podcasts as well including John Pemble and âUnder the Golden Dome,â but they have also expanded with HD stations.

Ray Dennis runs a cool website called desmoinesbroadcasting.com that includes all sorts of relics including an audio clip of Dic Youngsâ final signoff on KIOA. He also coordinates a group called Microphonies that includes a handful of TV and radio guys who get together for lunch at the Iowa Machine Shed on the first Wednesday of the month. They also host a Microphonies After Dark via Zoom that is also on the first Wednesday of the monthâ¦ except itâs, of course, after dark. If you are interested in getting involved, send Dennis a note at ray@raydennis.com. ♦