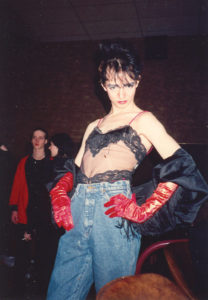 I moved to Des Moines in the early summer of 2007. My first dwelling was on the southside where Grayâs Lake Apartments are now, located behind what used to be AIB College.

At age 22, I spent most of my time watching movies, one of the few things I could afford to do. I quickly discovered the Varsity Theatre and the Fleur Cinema for my art house needs. It was a great year for movies: âNo Country for Old Men,â âThere Will Be Bloodâ and âJunoâ all came out that year. I had become obsessed with grindhouse and exploitation films from the 1970s including the Robert Rodriguez/Quintin Tarantino double feature âGrindhouseâ and Rob Zombieâs âThe Devilâs Rejectsâ (Rodriguez and Zombieâs finest hours). I wanted to dive deep into the seedy side of movies, but Des Moines really wasnât the place to catch midnight movies of any type. Then I learned about a small discount theater in West Des Moines called Billy Joeâs Pitcher Show, a lounge and second-run movie theater that played âThe Rocky Horror Picture Showâ on 35mm every Friday at midnight.

It was tucked away at 1701 25th St. in West Des Moines, just west of 22nd Street and south of University. The building didnât resemble a theater in any way. It looked more like a bar on the west side that was trying to be cool. Billy Joeâs Pitcher Show opened on Feb. 17, 1984. It was a hybrid lounge/karaoke bar that was attached to a movie theater. They served food and drinks in the theater, which was unique at the time. Customers could also smoke in the theater.

Prior to attending, I heard a few stories about the place through people I came in contact with. Comments I heard included: âPeople have sex in that place,â âPatrons can smoke cigarettes, and if there are more than a few people in there smoking, a cloud hovers just below the screen.â I knew I had to go.

Even so, second-run movie houses never interested me. When I lived in the Quad Cities, we had the old Nova Theaters where you could catch a second-run movie for $2.50. But Billy Joeâs had the midnight show, and that was something I hadnât experienced before, outside of a special Halloween double feature screening of âFaces of Death IVâ and âNightmare on Elm Street Vâ at the Wynnsong in Cedar Rapids when I was in high school.

Some friends from Iowa City came to town on a Friday afternoon, and they all crammed into my one-bedroom apartment. We crushed a 30-pack of Busch Light while the girls got ready. We all piled into my 2000 Honda Accord and headed over from the southside to West Des Moines. When we got inside, we could instantly see the aforementioned tobacco cloud that hovered between the seats and the screen.
The group I was with were a bunch of show choir and band dorks. Although we were all friends, I was not part of their normal crowd. Dancing around in my underwear, or going out in drag, were not my thing. Even though I raised my fist against the George W. administration, I was much more reserved and conservative back then. My days of walking around in my underwear didnât come until I hit my 30s.

We sat through the entire movie, even though we had all seen it many times. On various dance numbers, we would stand up and make our way to the front of the theater to perform the routines to âTimewarp,â âHot Patootieâ and, my personal favorite, âOver at the Frankenstein Place.â The thing that stuck out to me the most was that just 20 feet away from us was a handful of middle-aged folks drinking in the lounge seemingly unaware of what was happening in the theater next to them.

Melissa Winters was a patron of the midnight âRocky Horror Picture Showâ back in the early 1990s, and her story is much better than mine:
âA night at Billyâs started an hour or so before the midnight show,â Winters said. âEveryone would gather outside, waiting for them to be done cleaning up from the late movie. Theyâd let everyone in around 11:30.â

She said Billyâs was a unique setup, with tiered table seating, lots of room to socialize with different groups of people, and a large front area where the people who acted out the parts would perform.

âIt was a place where everyone was welcome, accepted,â she said. âWeirdness was the norm. It gave so many of us, in the days before the Internet, a place to be ourselves, to find âour people.â â

Winters said she met her first husband at Billy Joeâs.

âWe were friends of friends,â she said. âWe hadnât even talked during the time I was going regularly (1990-1992). But I ran into him shortly after graduating college, and we hit it off. It was like having family in common, both coming from that crowd of people.â

Billy Joeâs Pitcher Show shut down its theater on Feb. 7, 2009. It had a short second life as just a bar/lounge (changing its name to Billy Joeâs Lounge).

Truth be told, I only went to Bill Joeâs once. If I wanted a seedy place to hang out, I wandered down to the many old bars that Des Moines had to offer. Letâs hope that, with the new Varsity Theater set to re-open, we may see a return of the midnight âRocky Horror Picture Show.â ♦