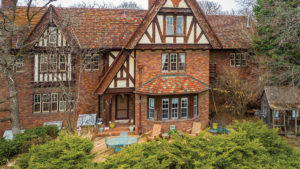 These are strange days for us all, but we will push ahead. Like Mathew McConaughey said in a YouTube video, âRight now we are at a red light, but there is a green light on the other side.â Leave it to McConaughey to take a break from massaging the new 2020 Lincoln Aviator to fill our country with hope. My column this month focuses on a famous home in our city that many of you have likely driven by.

This Des Moines icon sits on a small hill at 4507 Grand Ave. Robert Butler moved his family to Des Moines from Chicago after making his money as an attorney for Cyrus McCormick, who patented the mechanical reaper (a big deal for the farming industry). The Butlers were a quiet family that didnât have much to do with Des Moines aside from buying properties and building all around town. The Butler grandchildren donât have any recollection as to why they moved to Des Moines, except that the land was more affordable than Chicago real estate.

The house was designed and built by architect Norman Vorse. Leo Landis, state curator at the Historical Society of Iowa, said, âNorman Vorse left many imprints on the neighborhoods west of downtown. From Hoyt Sherman Theater, to St. Augustin Church, to his familyâs home at 4222 Woodlawn, our cityâs character benefits from Vorseâs work. The Butler House, designed by Vorse, is an exceptional example of the Tudor Revival style of architecture that was prevalent from the 1910s into the 1920s.â

Robert Butler and his wife, Edith, moved into the house in 1923 and raised their family. His brother Earl Butler built the Butler Mansion located at 2633 Fleur Drive. The brothers did not see eye to eye, and Robert controlled the family trust. A fallout occurred, resulting in the two not speaking to one another ever again. After Edith passed away, the property was sold and converted into apartments in 1963.
The management company that purchased the property converted the bedrooms to single-room efficiencies, and the third floor became one large apartment.

âI lived on the top floor with four roommates,â said Jeanie Sheldon of Waukee, who resided at the Butler House during the early 1960s. âOne remarkable thing about the apartment was that it had concrete floors on the third floor. The story was that the area had been used for the kids coming home from college, and the concrete floors were there to keep the noise from seeping down to the grown-ups. I donât know if that was true, but when we lived there, it was party central and apparently our noise didnât bother our neighbors… They never complained. The best thing is that we spent a lot of time in the Art Center gardens. In those days, there were concerts at the reflecting pool. We were all too broke to buy a ticket, so we would go sit outside the bushes and listen. There were some great names there: Peter Duchin, George Shearing, Josh White and Miriam Makeba, to name just a few.â

The Butler House remained as apartments for several decades until 1996 when Clark Smith and his wife, Lauren, decided they wanted to open up a bed and breakfast.

âA buddy of mine drove by The Butler House one day and told us about it,â Smith said. âThere wasnât even a For Sale sign in the front. We reached out, and lo and behold, it was actually for sale.â

The Smiths moved in that year and renovated the entire place. The couple completed renovations in 1999, and, that September, the Des Moines Symphony used the newly remodeled property as a âshow how.â Each room was designed by different groups around town. Sticks had the master suite. Meredith was also involved. In October of 1999, The Butler House officially opened as a bed and breakfast.

âThe first year was great,â said Clark. âB&Bs were very popular back then, and all of our guests were fabulous. We had thousands of them over the years with lots of repeat business.â

As the decades passed, Airbnb became a common option for travelers, and the bed-and-breakfast industry took a hit.

âI saw the writing on the wall early on,â Clark said. âOur business started to slow down, and it gets really hard to compete.â

Lauren passed away in 2018, and Clark took it as a sign that it was time to move on. The Butler House is on the market, and he hopes someone sees what he and his wife saw in the place all those years ago. ♦