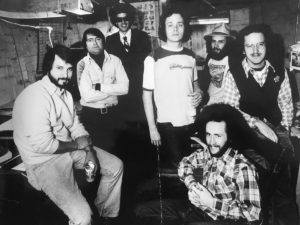 On the morning of Wednesday, June 29, 1977, residents of Des Moines woke up and began to carry out their regular morning habits: They got out of bed, opened their living room curtains to observe the rising sun, and drank their pre-timed brewed Folgers.

Some of those who left their homes to search for the morning edition of The Des Moines Register were greeted by not one but two papers that morning: The familiar one had two headlines âPresident says more kids OKâ and âBirds and the bees cause home trouble in W.D.M.â It was black and white and known as âthe newspaper Iowa depends on.â

The other was different. It had big bright colors and a headline that read, âChasing the ghosts of flight at Kitty Hawkâ by Jon Bowermaster. The paper was called The Daily Planet, and not only did it grab the readersâ eyes with a little hippie magic, it was alsoâ¦ free.

The Daily Planet was started by Drake University students Jon Bowermaster and Larry Vint. Gary Gildner, who was a professor at Drake at the time, was instrumental in helping these ambitious young men get the independent paper off the ground.

âThey were a group of independent-minded people, and I admired them. Some of them were students, and some of them were part of that vague underground side of Des Moinesâ¦ the scruffy types. It was a fly-by-the-seat-of-your-pants kind of operation when it got started,â said Gildner, who is now 81 and an accomplished author and winner of many awards including the Iowa Poetry Prize. He mentored these young men and passed story recommendations and new writers their way. He also contributed his own fiction in the early days of the publication. 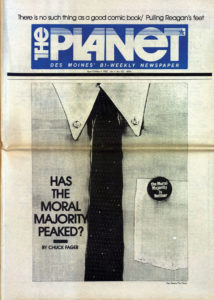 After shortening its name to The Planet prior to the release of âSupermanâ in 1978, the publication eventually ceased in 1982.

âOne of my students was the movie critic. He was called The Bear,â Gildner said. âI was able to get him a scholarship to Drake and even a place to live next door. His involvement was intense, and he was a great writer.â

Other members of the team included Bill Pierce and Mike Walker, who were two of the main writers, and Bruce Scapecchi, who wore the suit and sold the advertisements.

The Daily Planet set up its offices above the building at 2304 University Ave. At the ground level was the famous Beggars Banquet sandwich joint, which also was a regular advertiser for the paper. Brad Harvey came into the fold a few years later.

âI was the Joe Biden of music reviewers,â Harvey said. âMike Frisbie was the original music guy, and eventually when he decided he didnât want to do it anymore, I took over.â

Frisbie, as some CITYVIEW readers might remember, was the floating host for Iowa Public Televisionâs Sci-Fi Friday Night (and later Sci-Fi Saturday Night) in the 1990s and early 2000s. He was also involved in the early days of KFMG and KBLE radio stations.

Some of you might be wondering, did Superman ever call asking for his newspaper back? Iâm glad you asked. In the same office space where the Daily Planet set up shop, there was also a comic book shop with a name no one can seemingly remember. The year was 1978, and Christopher Reeves was about to change the pop culture scene forever by slipping into blue tights, red boots and a matching red cape. Superman was about to hit the big screen. The comic shop sent a note to the folks over at DC Comics about a local independent press using their fictional name. Shortly after, Des Moinesâ Daily Planet was changed to simply, The Planet.

The April 22, 1982, edition of The Planet was the publicationâs final issue. Life takes us into new directions, and everyone who was involved went on to new things.

Jon Bowermaster become a writer and documentarian filmmaker. His first assignment for National Geographic Magazine was documenting a 3,741-mile crossing of Antarctica by dogsled. He currently hosts a weekly radio show/podcast called The Green Radio Hour with Jon Bowermaster at radiokingston.org.

Gary Gildner now lives in the foothills of Arizonaâs Santa Catalina Mountains with his wife, Michelle. He is currently writing a new novel.

Brad Harvey is retired in Des Moines but has spent a good deal of his retirement volunteering for 98.9FM KFMG with his radio program, The Donut In Grannyâs Greenhouse.

Mark Walker went on to become a career journalist with publications including Rolling Stone magazine. Many people have asked where he is, but no one seems to know.

Drake University has made the entire run of The Daily Planet available for free through its digital archives, and I highly recommend taking the time to check them out: http://bit.ly/2HzHvyF. ♦