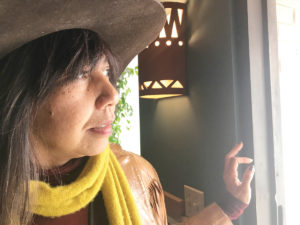 Meet Melinda Hoffman, an artist from San Diego, California, who travels the world selling her art at shows. She has developed a network of folks who she has met through social media that allows her to live like a local in every city she tours. She came to Iowa for Vintage Market Days at Jordan Creek. Like me, she stays with locals as a way to make travel more affordable and as a way to connect with people on a more personal level.

Are you originally from San Diego?

No. I was born in Chicago, Illinois. I attended the Art Institute of Chicago and studied fashion design. So I am a Midwest girl at heart. Chicago has never felt like a big city to me. It just felt like a town that was really spread out. Everything is neighborhood based. My first job out of school was designing childrenâs clothes in the 1980s. A career in fashion design had its perks, as I got to travel around the world to places like Italy and France to attend fashion shows, even in the childrenâs market. My boss taught me how to pack lightly. Even if I was traveling for two weeks, I would only take one carry-on suitcase.

How did you transition from designing childrenâs clothes to making jewelry and leather accessories?

I needed to make extra money back in the 1990s, so I started using found objects like fence wire, glass and other scrap material. I spent those early years mastering the process. It wasnât my full-time job yet, so I was able to take it slow. The real change happened in 2001. I was living in Scottsdale, Arizona, and 9-11 happened. It was the catalyst to a lot of bad things: big businesses were filing for bankruptcy, I was laid off multiple times, and my marriage of 24 years ended in divorce. It sometimes takes something devastating to change your outlook on life. I had to rethink everything I had learned about my career. In the long run, all of this saved me because I found what I really wanted out of this life.

So were you able to just jump right into it?

I still had to have a part-time job while I was getting this new career established, but this was 100 percent my focus. I decided to take a part-time job at a leather company. It was sort of like paid education. I was making some decent money, and I was learning how to work with the material. There would be nights I would just search the Internet for different designs, and if there was something in my head that I couldnât find, I would just create it myself. Shortly after this, I began doing art shows on the weekends while still working at the leather company during the week. In 2010, I had built up enough experience that it was time to cut the lifeline. I quit my job, sold all my stuff and moved to San Diego.

Now that it is 2018, what all has changed for you since the day you moved?

I know everybody! Not really, but I know a lot of people. My story is unique, and I have met a lot of people who do these art shows with similar backgrounds. You see a lot of the same faces. In fact, even here in Des Moines. Don Short, who owns West End Salvage. I met him here, and we are both going to be attending Junk Bonanza up in Shakopee, Minnesota. He has an amazing eye. I made two trips to West End while I was in Des Moines. I could spend hours there.

When you do shows from coast to coast, you create a âfreedom network.â You can travel anywhere and be a local.

I met a guy a few years ago on Instagram. He liked my work, and we would interact. This was the only communication we have ever had. A few months ago, I told him I was traveling through his area and wanted to see if he wanted to meet up. Unfortunately, he was going to be out of town, but he invited me to stay at his house while he was away. Thatâs crazy. You would think most people would be way more cautious. But freedom is that keyword. This second chance for a career has brought the most happiness I could ever ask for.

To learn more about Melinda Hoffman and her travels, search for her artist handle âModernMuse61â on Google. ♦