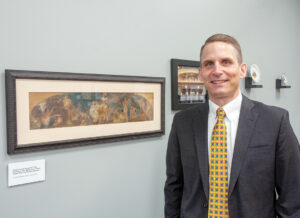 Chris Johnston poses with his favorite piece: a study by Douglas Volk of his âFur Trading Period in Des Moinesâ mural in the Polk County Courthouse. Photos by Sofia Legaspi Dickens

From the outside, the office building at 7900 Hickman Road looks like any other. But walk inside, and youâll find a 2,000-square-foot courtroom packed full of history.

The Law Museum of Iowa was created by Chris Johnston, founding partner of Law Group of Iowa. Each artifact is cataloged and organized into different displays, each with its own exhibition text. Many items can be viewed online at lawgroupofiowa.com/museum.

To a certain extent, Johnston has always been a collector, but this particular project began about four years ago, when he and his partner began constructing their office in Windsor Heights.

âI knew we were going to put in a courtroom â Iâm a trial lawyer, and itâs what I do and believe in. I also knew that was going to result in a whole bunch of wall space. So, as soon as he and I committed to building it, I started looking for things to get my hands on.â

The museumâs display on the Polk County Courthouse includes a large elevation of the building, formerly housed at Java Joes.

The result is impressive. After scouring antique stores, eBay, old courthouses and other items through word of mouth, Johnston has around 70 pieces on display â although he has even more unrelated pieces in storage.

âI have some people who go, âChris, I have this old legal document that has nothing to do with anything.â But I canât really stomach the thought of just throwing it away. So, Iâve become like a clearinghouse, almost.â

Johnston said he tries to focus the collection on trial history and âan educational slant,â as their office welcomes school field trips and mock trial scrimmages.

The courtroom displays artifacts like a jury wheel used to select jurors at random, a stenograph machine from 1978 and even leather jury chairs from the old Warren County Courthouse, built in 1938.

âI bought those at auction when they were tearing it down,â he said. He had also acquired the gallery benches, but they couldnât be salvaged. âIt turned out the gallery benches had been modified so many times over the years that the seats were all full of hardware â bolts and stuff â so the furniture guy I was working with was like, âYeah, itâs going to cost you about a billion dollars to do what you want to do.â â

Aside from courtroom equipment, other exhibits include an assortment of antique political campaign pieces, Iowa-specific items, law in advertising and international pieces in a display titled âJustice Around the World.â Here, Johnston pointed out an unassuming piece of paper: a diploma from Scotland, showing that law school lasted all of five months in the 1800s.

How long was Johnston in law school?

Johnstonâs proudest accomplishment in his collection is a section dedicated to the Polk County Courthouse. Its centerpiece: a large elevation drawing purchased at auction when Java Joes closed downtown.

âThey said, âWe donât know anything about it, and itâs been in the rafters forever,â â Johnston said. âSo, I bought it and spent entirely too much money on it. Iâd love to know who did it, but Iâll probably never know.â

Other pieces include five German hand-painted porcelain pieces depicting the courthouse, and historical images of the first two courthouses that preceded the current one. But Johnstonâs most prized possession is a rare color study for a large mural in the courthouse, painted by artist Douglas Volk.

âItâs something thatâs that old; itâs still there. We can go look at it. Theyâre virtually impossible to come by, and I just sort of dumb walked into it.â

The Des Moines Register and Leader announced the completion of the mural in November 1913. Johnston has a clipping of the article, of course.

The courtroom is open to both museum visitors and community groups looking for a place to meet. Since it is a working law office, Johnston recommends calling first, but rest assured â itâs never an inconvenience.

âI will put down what Iâm doing,â he said. âIf you go, âHey, Chris, I heard youâve got this collection; I want to come see it,â I would easily stop working on a case and say, âCome on!â This is more fun.â ♦