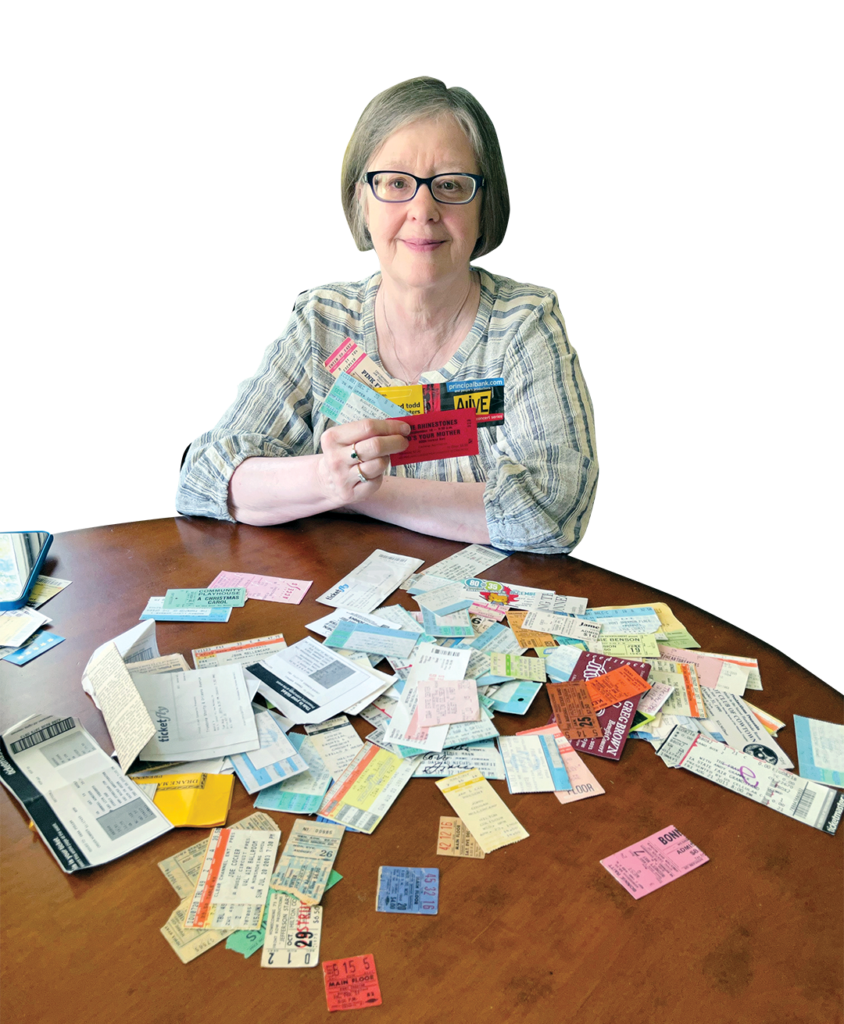 A large envelope stuffed with varying sizes of faded paper contains more than 50 years of music memories for Terry Bentall.

Inside the envelope are dozens of half-torn concert ticket stubs, full-size tickets and â her latest â printouts of tickets for concerts sheâs attended.

One of the first concerts dates back to 1968, a Three Dog Night concert at the old KRNT Theater. She paid $5.50 for the general admission ticket, writing details on the back of the ticket.

As Bentall picked up each ticket stub, she turned it over and gazed to the ceiling to invoke her memory of the concert. At Steppenwolfâs Chosen Few concert in 1969, she was just 13 years old when she and a friend walked to Veterans Auditorium for the concert.

âI danced on the speakers,â she recalled. âI remember go-go dancing as they played âGet your motor runningâ as we climbed up on the speakers.â

Thirteen may seem like a young age to attend a concert, but it wasnât out of the ordinary.

âMy parents didnât seem to mind. We lived close to Vets and could walk straight up there,â she explained. âI was known as being responsible.â

Bentall, a graduate of Des Moines Technical High School, acknowledged being naive about attending concerts and being fashionable. 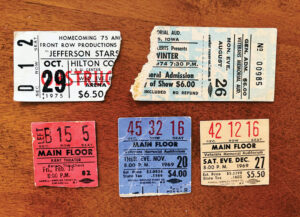 âMy friend Kim had been to concerts before. She knew what was going on. She wore a leather floppy hat and talked about CCR,â she recalls. âI didnât even know who CCR was.â

(It stands for Creedence Clearwater Revival, if youâre wondering.)

âI never camped out for tickets, but I did stand in some long lines. That was the only way to get tickets at the time.â

One of her most surprising concerts was in 1972. John Sebastian was the main act, with Earth Wind & Fire opening. Sebastian canceled, so only Earth, Wind & Fire played.

âThey were just getting to be popular,â she said. âIt was a fabulous concert. It was really cool.â 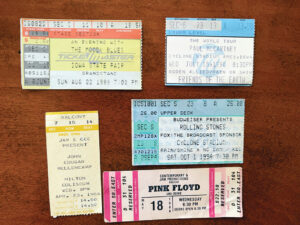 Bentall was hesitant, but admitted, âPeople used to smoke pot all around us. My friend and I traded a joint for two cherry cigars. I took my younger sister to concerts, and she was wide-eyed looking at everyone lighting up all around her.â

Certain tickets were works of art. Bentall has begun a spreadsheet of concerts sheâs attended and searches the Internet for exact details. She said sheâs upset with old Ticketmaster tickets, which began being issued in the early 1980s.

âAll of the Ticketmaster ticketsâ ink has faded. Itâs disappointing.â

One concert she recalled was singer Shawn Phillips.

âHe used to have the longest hair. We heard he was in an accident where he got his long hair caught in a boating motor. He didnât have much hair at the concert. I really wanted to see his hair.â

She also remembered unpleasant concerts, including The Black Crowes.

âThey played one song and disappeared for 20 minutes behind the stage, probably doing drugs. Itâs disappointing when you pay that money for tickets, and itâs a bad show.â

She recalled a Foghat concert at Veterans Auditorium, where she and her friends were being shoved together into the stage.

âOh, that was scary, getting crushed into the stage,â she said. âI can relate to the concerts in the news, where people have gotten crushed in the crowd.â

As paper tickets give way to electronic tickets, Bentall logs her latest concerts onto a spreadsheet, reminiscing her wonderful concert memories. And even as Bentall has hit retirement age, she continues to attend as many concerts as possible.