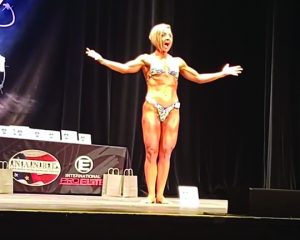 The backstage atmosphere before a bodybuilding competition is unlike almost any other.

âYou go in the competitor entrance, and you see all these beautifully sculpted bodies pumping up and getting ready to get on stage,â says Renee Schneider. It takes gumption, grit, determination and pure passion to succeed, but it isnât all business. âEveryone is laughing and having a good time, yet still sizing up the competition.â

Electricity fills the air, as does an abundance of spray tan product, and people are doing their hair, touching up their makeup and applying glaze. Meanwhile, there is an ever-present clinking of weights and intermittent whispers of aerosol adhesives being released.

âEverybody gets glued into their suits,â she explains. Being unglued, in this context, puts a participant at risk of suffering an embarrassing wardrobe malfunction.

But the most unmistakable oddity isnât the unending sea of incredible physiques nearly devoid of body fat, instead itâs the affection these (mostly) strangers have for one another.

âIt wasnât a competition,â she says. âIt was more of a celebration. … The camaraderie is really cool,â she explains. âWhen people do well, youâre really happy for them because they earned it.â

Schneider is a first-year competitor, but she earned second place honors in two categories at the North American Natural Bodybuilding Federation (NANBF) Natural Iowa Championships held at Hoyt Sherman Place on May 8 (Womenâs Physique – Novice; Womenâs Physique â Open). In addition, she won the Sportsmanship award and did well enough in her 60-second posing routine â a portion of the bodybuilding event that is put to music and designed to please the crowd â that she was named the âBest Poserâ at the event.

Most people have nightmares about being scantily clad and wearing little other than underwear while standing in front of a group of people. Especially if it is in front of an eagle-eyed group of onlookers who pry with aggressive eyes to seek out imperfections.

How did this happen?

When she isnât flexing her muscles on stage or training, Schneider is a mother of two teenagers, lives in Grimes and owns a local marketing firm. But performing on stage was her childhood passion. Bodybuilding competition combines that first love with the gym, her adult âhappy place.â

âAbout a year ago, I decided to kick it up a notch,â she remembers. Thatâs when she asked her coach, Ryan Irwin, to help her improve.

âMold me,â she told him. âIâll do whatever you say.â

That meant putting in 90 minutes or more pretty much every single day at the gym, and thatâs not the half of it. The use of performance-enhancing substances is never permitted at NANBF events. All competitors must successfully pass a polygraph screen prior to competition, and the athletes are also drug tested. This helps protect peopleâs health, but it also means a strict no-cheat-day diet is absolutely necessary.

âYou use nutrition and grit,â explains Schneider. âEighty percent or more of your results come from the kitchen,â she says. âGenetics play a role, but itâs mostly nutrition.â

Getting good coaching is also a key.

âI couldnât have done any of it without (Irwin),â she says in a nod to her mentorâs expertise. âHe is your biggest cheerleader.â

Next up, Schneider competes in Minneapolis over Memorial Day weekend. That will be only her third competition. Regardless of her results there, she plans to continue plugging away at least another season or more, âor for as long as my body will let me.â

More information about NANBF is available at www.naturaliowamuscle.com, but Schneider insists you must know at least one more thing.

âIf someone has never been to a show,â she says. âIâd encourage them to just go sit and watch and be inspired.â ♦