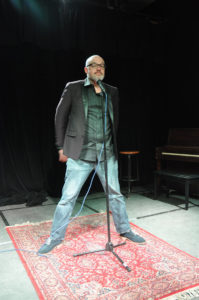 Demo serves as co-slammaster with Kevin Marken, who handles the behind-the-scenes action. The duo took over responsibility for the slam from its founder, Heather Knowles. She held the first slam event at Borders Books about 18 years ago before moving to its current time, date and location, downtown at Java Joes on Fourth Street. The coffee shopâs owner once informed Knowles that the slam had transformed Javaâs least productive night of the week into one of its best.

At slam time, the bright lights shine upon the poet who is standing in front of the live mic. On the stage, it is difficult for the reader to see the audience, a mishmash of 30-50 people of varying ages, cultures and levels of caffeination. They appear only as dimly lit silhouettes.

College professors. Cowboy hats. Young adults. Kids just finding their voice. Elderly. People ages 8 to 88. The eventâs allure is at least partially derived from the roomâs fullness and diversity. Slam continues to welcome anyone with a desire to read original poems. It serves as a safe place for artists to get stuff off of their chest.

Attendees are instructed to bring three poems to read, and to be ready to have fun.

During the first round, each contender reads for a maximum of 3 minutes. Wowing the audience is the primary path to advancing. The five-judge panel is tasked with scoring the action and has the authority to do as it sees fit, which means that technically the event is not a popularity contest, but the conventional wisdom amongst Demo, Marken and Knowles is that the judges generally struggle to go against the peopleâs will.

The top readers, as determined by the judges, advance to the second round. Eventually, the field is narrowed to three, after the third and final round the winner takes home a pile of used books or some other modest non-monetary prize.

Slams are competitive, but even though the word âslamâ has a street-fight-type connotation, the local version isnât meant to be cutthroat.

âAnyone who gets up on the stage under those stage lights and is amplified right there,â says Demo, pointing to the mic under the stage lights, âIâd say there is a 99 percent chance it is the first time this has ever happened to them.â

Without a nurturing atmosphere in the room, many newbies would be one and done.

Some places slam for money, but not here. Too often greed kicks in, and people start bringing friends and stacking the crowd in order to influence the judges.

Can you make a living doing poetry slams?

âNoâ is the emphatic answer. It is stated without equivocation and in unison of everyone within earshot.

The slam does often arrange headliner acts â traveling feature performers who join in on stage â but they perform primarily on their own dime. ♦

Des Moines Poetry Slam is a recurring monthly event hosted at 7 p.m., every third Tuesday at Java Joes CoffeeHouse, 214 Fourth St., downtown Des Moines. Sign-up starts at 6:30 p.m., and slams often wrap up at approximately 9:30 p.m. The poets are not censored. The content is regarded as mostly clean, but buyer beware, F-words reportedly can and do happen.