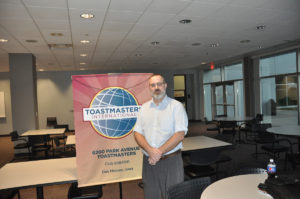 Chad Hauge serves as the vice president of public relations for his Toastmasters group.

Years ago, as a Christmas gift, one of Haugeâs seven daughters gave him a book full of empty pages. The gift came with a challenge: âWrite your own story.â

âIâm not disabled,â Hauge remembers thinking. âIâm retired military, but I wasnât a general or colonel or anyone like that. None of my kids have disabilities that theyâve worked through. I donât have emotional problems. Iâm not a professional athlete. Iâm not a scholar. Iâm not anybody that anyone would write aboutâ¦â

And all of a sudden, he had his eureka moment.

The thought stuck, and years later, after joining Toastmasters, his first speech informed the audience that he might be nobody special, butâ¦

âIâm still someone you should listen to,â he says.

The audience agreed. His speech went well, and people approached him wanting to know more. And Hauge became hooked on Toastmasters, something he originally didnât think he had any need for.

âIâm a retired Army officer,â he says. âI spent 17-and-a-half years in the Army, and the last 10 as an officer. So managing meetings and managing people, all that kind of stuff, it was second nature to me.â

But at the urging of people Hauge respected, he decided to try Toastmasters anyway. After learning some new speaking tactics, heâs glad he did.

In the military, Haugeâs audiences could be taken for granted. It was in their best interest to pay attention. But speaking to civilians was another matter. Engaging people became more difficult and more important.

Toastmasters International aims to make leaders. The groupâs core values include integrity, respect, service and excellence. Toastmasters boasts more than 357,000 memberships in 16,600 clubs spread across 143 countries. A typical club consists of 20-40 members who meet weekly, biweekly or monthly for 90 to 120 minutes. Members give impromptu talks and evaluate one anotherâs presentations without a formal instructor. They are trained to point out strengths and suggest improvements. This feedback process is a key to the programâs success.

The group Hauge attends has approximately 30-40 members, and he says a crowd of 20 or more attends most meetings. Heâs been attending meetings for about two years. He has been an official member for most of that time and was recently tabbed to be the clubâs vice president.

The program is designed to develop people professionally, but for Hauge it is more of a hobby. He says learning is fun.

âIt trains your brain to answer with support and not to ramble,â he says. âAnd to fit it all into an appropriate time span.â

The listeners at meetings are focused on giving good feedback that encourages and improves the orator.

âToastmasters is all about improving the person,â he says. âHow do we move you from where youâre at to where we think you can be?â

According to Hauge, improving speaking skills is important, as is learning to lead, but something else is Toastmastersâ trump card.

âEverybody interviews for a job at some point in time,â he says. Nailing that interview is worth a decent chunk of change. âToastmasters can help with that.â

If you like to talk and want to communicate better and to generally navigate the world in an improved manner, then Hauge encourages you to find and attend a Toastmasters club.

Hauge might be nobody special, but maybe you should listen to him anyway. ♦