The McVicker is risen 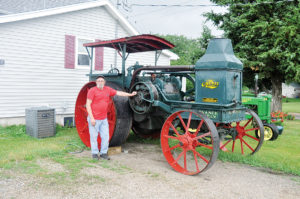 Pettey is pictured with the antique tractors that are parked in his Altoona lawn.

It looked like a cannon, and assuming the old engine wouldnât run again, the manâs plan was to transform it into a mailbox. But before putting it out for U.S. Postal duty, the man heard he needed to talk to Don Pettey.

Engines of just about every kind occupy Petteyâs Altoona garage. He has tiny exact-replica car engines that he built precisely to scale. He has tractor engines, including the two giant tractors parked in his front lawn. He even has an airplane engine. The self-taught machinist says he has spent more hours in his two-car heated sanctuary since he built it in 1980 than he has spent inside his house â and it probably isnât close.

The manâs McVicker engine was 100 years old, and after its abandonment, it had sunk into some remote rural farm ground where it sat for the last half-century. Buried, the McVickerâs cast iron was slowly leached of its rigidity. Nearly no one expected the rare single piston engine â rusted and incredibly brittle â to run again. The man who owned the engine figured if Pettey and his engine expertise didnât want to take a chance on buying it, then his McVicker would serve him well receiving incoming LL Bean catalogs for the foreseeable future.

At the turn of the century, before electricity was common, these types of gas engines were prevalent on Iowa farms. They mostly served to generate power to pump water, which might not sound like much to modern-day city slickers, but if youâve ever been on the end of a pump handle, you know what that would have been worth. Ads for the McVicker engine said farmers could âdo without two of your men if you had a McVicker Gasoline Engine.â

McVicker wasnât an exceptional brand. The design was unique but temperamental, which is probably why they are relatively rare. Pettey worried the antique was too far gone.

âThis thing looked like it went down with the Titanic,â he remembers.

But Pettey also remembered his track record of death-defying engine feats. If he could resuscitate this McVicker, itâd be a big feather in his proverbial cap. Pettey paid the manâs asking price, rescuing the engine from its potential postal purgatory, rolled up his sleeves, and he went to work.

For four months, Pettey completely overhauled the engine. He retooled what he could salvage and rebuilt the rest.

Memorials adorn Petteyâs garage walls. Stacks of books about car parts and how they go together are everywhere. He has lawn mower engines, electric engines, snowmobiles and scrapbooks full of successful war stories about making engines great again. But Pettey is most proud of the scrapbook of McVicker photos, proving the old engine would chug, spin and puff with well-timed precision.

âWhen it started up,â remembers Pettey, âit was like watching your kid come to life.â

He would have kept it forever, but while at a show showing off his work, a man expressed how impressed he was and started counting out the Benjamins ($100 bills). Pettey kept shaking his head to signal âno deal,â but when the gentlemanâs pile of cash grew to equal $8,000, the engine expert acquiesced.

The last Pettey had heard, the McVicker was on the road touring, first in Pennsylvania and then in Australia. He doesnât know where it is now, but if youâve seen it, heâd like to buy it back. No price is too high for a manâs pride and joy. ♦