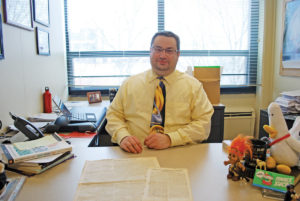 Andrew Pritchard sits at his desk at Iowa State University. The professor is holding the two oldest pieces in his antique newspaper collection.

Fewer people are aware that when Revere wasnât saving the nation from tyranny, the American hero earned a living at his familyâs precious-metals craftsman shop. To drum up business for the shopâs various wares, including silver bowls, pots, flatware and other items, Revere placed print ads in various publications. Centuries later, one of those newspapers, with an ad placed by Revere, is now owned by Iowa State University Professor of Media Law and Journalism Dr. Andrew Pritchard. 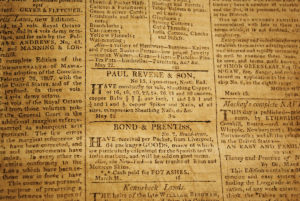 Some people like to write history, others prefer to relive it, and some enjoy collecting it. Pritchard does all three, and while he says his antique newspaper collection isnât anything to write home about, it has some notable pieces, such as the Revere ad and his oldest item, a London Gazette from March of 1674.

âYouâre literally touching history,â says Pritchard of why he enjoys his hobby. âThis was circulating at the time. This is how the people at the time saw their world.â

While he was finishing up his doctorate at North Dakota State University, Pritchard all but completed a degree in history on the side. This educational background, coupled with his career at the St. Paul Pioneer Press, led to his interest in antique newspapers. He began collecting about a decade ago in the middle of the Great Recession. Since then, he has collected newspapers from Minnesota, Montana and Washington state, and the collection doesnât stop there.

âIt was the recession; there was no shortage of last-edition papers,â Pritchard says. âProbably the first paper I put in my collection â that wasnât one that I had some content in â was the Cinci Post, one of the last p.m. papers, or evening papers.â

He says the Postâs last headline was a huge â-30-,â printed six columns across. ââ30ââ was traditionally used by journalists to signify the end of a story.

More recent additions to his collection include newspapers with stories about the 2006 execution of Saddam Hussein and the 2007 collapse of the Interstate 35 West bridge over the Mississippi River in Minneapolis. Both were big stories that broke during Pritchardâs time at the Pioneer Press.

Pritchard is a newspaper collector, but he also sells some of his finds. He primarily utilizes eBay and similar websites for these transactions. He focuses on noteworthy but now defunct papers like the Chicago Daily News and the Washington Star. As for selling, Pritchard has noticed a trend.

âItâs the late 1980s to early 1990s papers that sell the most,â Pritchard says. âItâs nostalgia. When I sold the Indianapolis News, I received a lot of attention. It went instantly, gone within a couple minutes. By the time I had loaded up another paper to sell, that one was sold.â

He often gets frustrated by sellers who claim that they have an authentic piece but sell replicas.

âIf you look on the inside of the newspapers, toward the bottom, you can faintly see the duplication mark,â Pritchard says.

While collections are fun to have and to build upon, Pritchard says that he has also learned a lot from collecting.
âYou can tell a lot about the audience by how the papers were put together â content, too. And it can tell a lot about the media-consuming audience,â he says. âPapers have steadily shifted from reading and thinking to more of a visual shared experience.â

In addition to historical treasures, Pritchard enjoys some quirkier newspaper collectibles as well, such as after the moon landing in 1969. Evening newspapers changed Monday to âmoon dayâ after learning the success of Neil Armstrong landing on the moon.