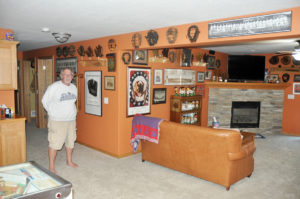 Mark Mahoneyâs Urbandale basement serves to display his collection of antique baseball equipment, including old-school gloves, catchersâ mitts and bats. He stockpiled his treasures while his sons were hunting for more valuable items at baseball card shows and flea markets.

During the summer of 1968, Mark Mahoney fell victim to the friendly confines of Wrigley Field. The Iowa kid from Oelwein entered that dayâs doubleheader ready to cheer for the Cincinnati Reds and The Big Red Machine loaded with stars such as Pete Rose and Johnny Bench. But by the time he left the ballpark, the âfriendly confinesâ hallowed ivy walls and rich history had turned him into a full-blown Cubbie.

âI walked out of there, and I thought, âThis is so cool, why would anyone not be a Cubs fan?â â he remembers.
The cost of a program that day was 15 cents. Mahoney kept it. He didnât know it then, but it became the first item in what would become an impressive collection of baseball memorabilia. As a kid, Mahoneyâs passion for the national pastime had driven him to buy baseball cards. He enjoyed opening the packs, chewing the gum and positioning the cards on his bicycle in a manner that made an appealing sound. But like most of his friends, he saw them as nothing more than a novelty.

Purposeful collecting didnât begin for Mahoney until his boys were old enough to share his passion for baseball.

The cards had been salvaged from Mahoneyâs youth. The collection didnât have all his old treasures, but it was the mid-to-late 1980s, and card collecting was at its zenith. His kids were hooked.

While his boys looked to expand their riches at card shows and flea markets, Mahoney passed the time looking for less valuable wares. Old baseball mitts became his fascination.

Baseball equipment has improved significantly during the previous century. Mahoneyâs Urbandale basement is a veritable museum that showcases sawdust-filled balls, Spiderman masks, a town ball from Cooperstown, mushroom-handled bats and other eye candy from yesteryear.

The Spiderman masks â with a mask shaped like a spider web â are approximately 100 years old. Ditto for the mushroom-handled bats. Mahoney wonders at how catchers could handle Bob Fellerâs 100 mph fastballs with those funny-looking mitts that arenât anything like they are now. 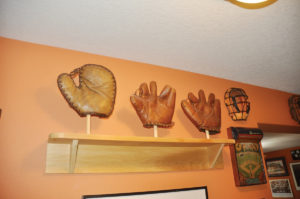 Change has been good and bad for baseball. Mahoney disapproves of recent changes to Wrigley Field â nostalgia is his preference for the park. But he loves all the improvements done to upgrade Principal Park during the previous decades.

âItâs a beautiful park,â he says. âThey did that up so nice.â

The I-Cubs home opener is April 5.

âI love the sound of a good hit,â he says. âBaseball was the sport growing up.â

With so much love for the game of baseball, it begs the question: Did the retired teacher ever skip school to watch a Cubs game?