Traditional parking meters on the out. Political campaign contributions on the rise. 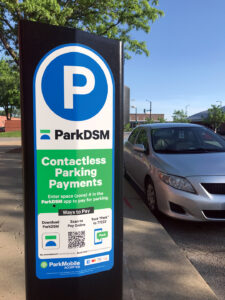 As more employees return to the office and in-person events are scheduled, the City of Des Moines is nearing the completion of its transition away from traditional parking meters. The ParkDSM mobile app launched in December 2021, with all metered spaces expected to be fully converted by August this year, according to City Traffic Engineer John Davis.

Instead of simply dropping loose change into an individual meter, drivers must note their parking space number and find a multi-space pay kiosk. They can also pay via a mobile app.

The ParkDSM app was released through ParkMobile, a national brand present in 500-plus U.S. cities. Currently, ParkMobile is utilized in Cedar Rapids, Ames, Davenport, Cedar Falls and Sioux City.

On top of paying through city-branded apps like ParkDSM, drivers can use ParkMobileâs flagship app or its website ParkMobile.io. Physical kiosks accept cash and credit card payments. Des Moines will have nearly 400 kiosks once fully implemented.

More than four decades have passed since the first parking meters arrived in downtown Des Moines. While the new parking system eases the burden of maintenance and expense on the city, its main benefit is improving mobility. How? Through the use of data.

âWe give cities a lot of data on whoâs parking when and where,â said Jeff Perkins, CEO of ParkMobile. âThat gives a city the ability to make smarter decisions around parking policies.â

ParkMobile made headlines in March 2021 when a third-party software it used suffered a data breach. Hackers accessed general account information but not credit card numbers and passwords, Perkins said.

âWe were the victim of a crime there, and itâs very unfortunate,â he said. âItâs something that every technology company is dealing with: cybersecurity issues.â

The company informed users of the data leak in May 2021. Perkins said they took steps to âreally shore up our systemsâ and prevent any future leaks.

âWe posed questions through our information technology department to ParkMobile and also looked at what the current standards are for security, especially data security,â Davis said. âWhile itâs always something we have in mind, we felt the answers we got from ParkMobile were satisfactory, and we were willing to proceed with contracting with them.â

Those who downloaded the app after March 2021 would not have had their data stolen, Perkins added.

A representative from ParkMobile said data is only stored as long as the userâs account is active. Financial and confidential data are encrypted. GPS data is not stored.

Some Iowans have been resistant to this change in the downtown area, but Davis noted smart parking technology is far from âcutting edge.â

âThis is technology that has been out on the street now, in other larger communities, for over 10 years,â he said.

Those who do choose to pay via the ParkDSM or ParkMobile app â the user interface is virtually identical â will be able to extend parking time from their mobile device.

Additionally, the City is exploring an option allowing app users to book parking spaces in advance. This would only apply to parking garages, not on-street parking, Davis said.

Looking even farther ahead: Sidewalk real estate will obviously expand as the old coin meters are taken down. Perkins emphasized the benefits of this space for cities to plant trees, display art installations and even create options for electric scooter parking. And as electric vehicles (EVs) grow in popularity, the city may need to factor that in, too.

The Iowa primaries are quickly approaching. On June 7, Iowans will take the next step toward electing their next U.S. senator, four U.S. representatives, and several positions at the state and county levels.

CITYVIEW gathered some of the most notable campaign contributions from 2021-2022. As of press time, the latest available data from the Federal Election Commission ran through March 31.

The biggest contributor to Carlinâs campaign has been Carlin himself. The attorney has spent about $296,000 in his run against Grassley, who has contributed exactly $0 to his own campaign. The same goes for the three Democratic candidates.

Speaking of Grassleyâs campaign, Texas Senator John Cornyn donated more than $316,000. Philanthropists John and Mary Pappajohn wrote a total of $12,900 to Grassley, plus $1,000 to Zach Nunn and $1,000 to Marianette Miller-Meeks, both Republicans eyeing seats in the U.S. House.

Other Grassley contributions of note: $5,000 from Tyler Kirk, board chairman at Atlantic Bottling Company, $2,905 from BJ Baker, CEO of Baker Group, and $11,600 from businessman Dennis Albaugh and his wife. Activist Jean Lloyd-Jones, who lost the Senate race to Grassley in 1992, donated $5,900 to Finkenauerâs campaign. In the last year and a half, she also made out checks to other Democratic candidates and organizations totaling $40,259.

The Risewick family of Seneca companies donated $8,700 to Hassoâs campaign and $7,800 to Miller-Meeks. Steve Jennings, former president of Simpson College, donated $2,300 to Axne. Nunn received several checks from Michael Krantz, former CEO of Adventureland and long-time GOP donor. Combined with donations from his wife Kimberly Krantz, the family has contributed $11,100 toward Nunnâs campaign.

Got Skinny? Email tips to editor@dmcityview.com