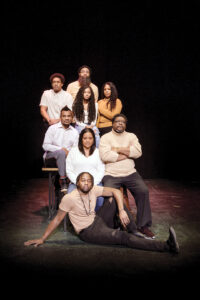 When two Iowa theatrical leaders join forces, it holds great promise as a âmust-seeâ experience. Pyramid Theatre Company and the Des Moines Community Playhouse unite to present Tony Award- and Pulitzer Prize-winning August Wilsonâs âThe Piano Lesson.â This also marks the Des Moines return of Pyramidâs founding dynamo, Ken-Matt Martin, where he and the other founders in 2014 forged a theatre company whose work and mission has flourished to be recognized on the national scene.

âThe Piano Lessonâ is part of Wilsonâs celebrated âThe Pittsburgh Cycleâ (or âThe Century Cycleâ), which presents a decade-to-decade portrayal of African-American community experiences and heritage in the 20th century. Pyramid previously produced Wilsonâs other Pulitzer Prize winner, âFences,â as their inaugural production. As reviewed by The Culture Buzz, that debut was hailed: âThe richness of this performing arts experience comes from the masterful blending of all elements â directing, cast and design. These key elements combine for an immensely satisfying show steeped with exceptional production values.â Pyramid Theatre Company continues to build from that memorable beginning.

During a Dec. 11, 2020, interview on CBS News with Academy Award-winner Denzel Washington about his film adaptation of Wilsonâs âMa Raineyâs Black Bottom,â fellow guests Academy Award-winner Viola Davis and artist Constanza Romero (Wilsonâs widow) shared insights into Wilsonâs works. These works dive into the African-American experience, as well as examinations of the human condition, with other themes ranging from systemic and historical exploitation of African Americans, race relations, identity, migration and racial discrimination.

Wilsonâs writings âcapture our humor, our vulnerabilities, our tragedies, our trauma. And he humanizes us. And he allows us to talk,â commented Davis, who stars as Ma Rainey. âHe could get the essence of human emotion in a sentence or two.â

âI see a lot of different plays. When Chekhov was writing his plays, he wasnât thinking about a little Black boy from Little Rock, Arkansas. Same with Shakespeare. They were writing to be truthful to who they were and to their circumstances. When I, as that little Black boy from Little Rock, Arkansas, see these plays that are truthful and specific, it moves me, and I can see the parallels between my family and that family.

âIt was important to (Wilson) to capture the spirit and poetic nature and language of Black people with hyper-specificityâ¦that attention to detail, to storytelling and the way language is used to tell these stories within Black communities and within Black cultureâ¦is what makes it accessible to others.

âAll of us know what itâs like to navigate family, legacy and familial issues that relate to love and everything else. The reason it (âThe Piano Lessonâ and Wilsonâs works) jumps off the page and does so well is because it is so specific.

âThe reason (Wilsonâs) work has resonated, whether viewed by white, blue, Black, brown people, is because he was being specific about who he was writing for.

âI think itâs healthy to acknowledge that not everything is written with other people in mind and thatâs absolutely what makes it a true cultural exchange. You are seeing something so far removed from yourself that it forces you to have to work a little bit to think âWow, how is that feeling so similar?â That is the reaction that gets to the empathy.â

Pyramid, through the dedication to their mission and through the vibrant energy and talent of âThe Piano Lessonâ cast, gives audiences the very real and visceral experience that August Wilson intended. The 1930s drama unfolds when the struggle between a brother and sister about the fate of their familyâs heirloom piano becomes the flashpoint of conflict. Pyramidâs collective theatrical acumen presented in the elegant confines of the John Viars Theater at the Des Moines Community Playhouse will deliver an unforgettable immersion.

Another notable regional offering is Tallgrass Theatre Companyâs âGod of Carnage,â the eighth annual Sarah Frank and Jack Balcombe Dream Project. Anchored by a quartet of veteran, talented performers, the theater will pulse with the electric drama of this masterful script. ♦