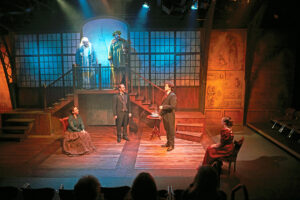 The Des Moines Community Playhouse has established a magical tradition each holiday season by presenting a family musical, and this year brings Rodgers and Hammersteinâs âCinderellaâ to vibrant life. First experienced by many of todayâs grandparents in the 1950 Disney animated classic by the same name, it is the only musical by this dynamic musical theatre team specifically written for television in 1957. Audiences delighted in this full color version, starring new Broadway sensation Julie Andrews (as Eliza Doolittle in âMy Fair Ladyâ) in the title role. This stage musical is filled with unforgettable songs like âIn My Own Little Corner,â âImpossible/Itâs Possible,â and âTen Minutes Ago.â The first known written occurrence of the Cinderella tale happened in 1634 when Giambattista Basile wrote a quintet of stories in the Pentamerone. This collection included other classic stories: âRapunzel,â âPuss in Boots,â âSleeping Beautyâ and âHansel and Gretel.â

In a new tradition for Greater Des Moines is its professional company, Iowa Stage Theatre Company, as it presents a marvelous adaptation of âA Christmas Carol.â This version, created three decades ago in Houston at the Alley Theatre, has a local connection. Award-winning designer Jay Michael Jagim was its original designer, as well as co-writing its script. He masterfully conceived how to adapt this innovative telling of Charles Dickensâ classic tale into the Stoner Theater space. This production brings fresh perspectives and insights into this beloved tale of yuletide redemption.

Just like a chocolate-filled advent calendar, Tallgrass Theatre Companyâs âA Very Merry Tallgrass Holidayâ holds a delightful assortment of nostalgic holiday memories â and, some with a twist. This family show will cover the gamut in triggering each personâs own seasonal reminiscences, bringing laughter and even a few warm tears. Thanks to a treasure trove of plays for kids from Drama Notebook, this promises a most tantalizing assortment of festive performances, pulling from familiar and new stories that include â âTwas the Night Before Christmas,â âTrees of Thrope,â âScroogeâs Christmas Eve,â âFor You or For Me,â âFruitcake the Gift that Keeps Giving,â âThe Elf Locker Roomâ and âSanta Letters.â This show has a limited run, so get your tickets early.

With the charm of a Hallmark movie, âShe Loves Meâ takes to the Ankeny Community Theatre stage. This musical (book by Joe Masteroff, music by Jerry Bock, and lyrics by Sheldon Harnick) reveals the competition between perfume shop clerks Amalia and Georg. Bock and Harnickâs most famous musical was âFiddler on the Roof.â The story is about two people who donât see eye to eye. They both respond to a âlonely hearts advertisementâ and now live for the love letters that they exchange. But the identity of their admirers remains unknown. Think âYouâve Got Mailâ put to tuneful music.

âThe Nutcrackerâ is scored with some of the most recognizable music ever created. As soon as any of the musical passages are heard, the listener is hard-pressed to keep visions of sugar plums from dancing in their memories. For many, âThe Nutcrackerâ was their first live performance experience. This tradition continues now, and, for any family with young ones who have not experienced this ballet, now is the time to book your tickets. Greater Des Moines has options from which to select.

To fully appreciate this timeless tale, harken back to 1892 when a two-act ballet, known as the âfairy ballet,â was performed in Russia. From a libretto adapted from E.T.A. Hoffmannâs 1816 short story, âThe Nutcracker and the Mouse King,â Pyotr Llyich Tchaikovsky wrote the score that has become part of the international fabric of ballet and classical music. The first full United States performance didnât happen until Dec. 24, 1944, by the San Francisco Ballet.

Ballet Des Moines brings this classic experience to vibrant life at Hoyt Sherman Place Theatre. Its elegant setting makes this a memory-making way to introduce neophytes to the beauty and energy of this âmovement languageâ artform, as the companyâs Artistic Director, Tom Mattingly, likes to refer to ballet. Another production happens in Ames at C.Y. Stephens under the guidance of the Robert Thomas Dancenter, which includes some 200 local children in that version. ♦