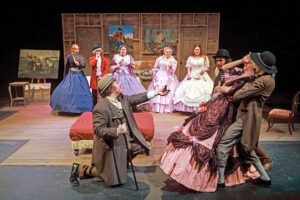 One source for theatre is often overlooked by the general public. Our institutions of higher learning offer some excellent productions. In the Greater Des Moines footprint, this includes Simpson College, Iowa State University, Drake University â and Des Moines Area Community College (DMACC). The latter has been retooling its theatre/performing arts programming under the guidance of its new Program Chair Carl Lindberg, who has created a more focused, dedicated AA degree program for emerging performers. These schools are the training grounds for talent who will eventually not only grace local and regional theatre stages, but also ascend to heights on national success. Central Iowans have the chance to see some of these budding stars in their nascent stages, as they deliver some stellar work on their educational stages.

Lindberg came to Iowa from Chicago, where he was a working actor for many years. Credits range from major Equity Regional stages, national and regional commercials booked through his Top 5 agency, plus working directly with smaller projects to fill in the project-to-project nature of being a successful working actor. He also has directed, produced, designed and stage managed nationally, from his home state of California to Pennsylvania. With such a wealth of experience, backed by a BA in Theatre from CSU Stanislaus and an MFA in Directing from Western Illinois University, DMACC landed a dedicated leader in providing its students invaluable training as they prepare for their futures as actors. Add the appeal of being closer to his wifeâs Iowa roots for their daughterâs sake, and this was a wonderful match.

âWe do four to five plays per year and make sure to provide a large number of roles to accommodate student interest from our Theatre Majors, our Acting Certificate students, and non-majors who simply enjoy performing,â Lindberg explains, filling in some details. âWe produce our season like a storefront theatre company, looking for titles that have a broad appeal for our DMACC community and anyone in the area while balancing a range of styles for our students to be a part of, whether theyâre working on the production or in the audience.â

Adding to essential courses like Acting I and Acting II, Technical Theatre and Play Analysis, Lindberg continued sharing the career-driven aspect of his departmentâs curriculum. âWe also added a series of industry prep courses like Acting for the Camera, the Business of Acting, Budgeting for Artists, Performing Shakespeare, Performing Musical Theatre, Voice and Movement, and so on. These are great electives for folks working towards transferring to four-year institutions that want to be ready for their new university and also the real world of theatre and acting.â

This solid training and educational approach yields strong results, and leads to DMACC as a destination to consider when exploring Central Iowaâs performing arts offerings.

The Des Moines Playhouse wrapped up a three-performance, sold-out weekend run of their inaugural Penguin Project show, âAnnie Jr.â Reporting on shows already past usually would be bad form, but this production was a first, important step in a new shining facet of Playhouse programming.

âThe Playhouse selected the Penguin Project as a demonstration of our mission to create extraordinary, shared experiences through live theatre,â shared Executive Director David Kilpatrick. âWe want to serve the whole community, and that is reflected by giving opportunity to those who are not always seen.â

This is a three-year commitment. âIt takes a couple of times of making mistakes to get it right,â continues Kilpatrick about the Penguin Project. If âAnnie Jr.â was a mistake, may our community be blessed with many such inspirational mistakes.

âTogether we will learn, grow and become better artists and better people.â ♦