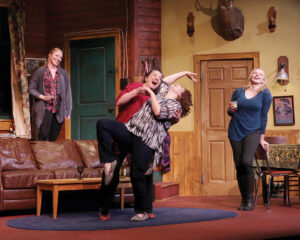 Guinness will have to confirm, but few, if any, playwrights have experienced three world premieres in the span of nine months. Iowa has one such creative of lofty stature: Karen Schaeffer. Her âTemporary Insanityâ was produced by Bellevue Little Theatre in Omaha last June. It was nominated in seven categories under Performing Arts – The Omaha Entertainment & Arts Awards, winning the Outstanding Comedy honors. In February of this year, the American Association of Community Theatre selected Schaefferâs âUnpacking Motherâ as part of their coveted NewPlayFest program to annually introduce six new plays to audiences. This story displays Schaefferâs versatility, delving into a heart-touching tale about two sisters in the wake of their motherâs death.

âGirlsâ Weekend 2: The Bachelorette Partyâ (GW2) is the third, a sequel to the boisterous, delightful continuation of this theme when the Des Moines Community Playhouse produced âGirlsâ Weekendâ during its 2014-15 Season. Schaefferâs playwriting muse has given her a focused dedication to a growing legacy of well-crafted scripts featuring strong female characters. Audiences are loving them and the witty, well-honed dialogue that keeps each story clipping along. The next launch happens in the Stoner Theater inside of Des Moines Performing Artsâ Civic Center and will be produced by Iowa Stage Theatre Company.

Schaeffer shares her mission in playwriting. âI started with the notion there is a shortage of female roles in theatre. As theatres began to embrace the same notion, my plays got picked up. My aspirations coincided with a new value placed on womenâs stories.â

She created âGirlsâ Weekendâ 11 years ago. For a couple of years, her focus was to get the script right and then get it produced outside of Iowa. When it was picked up by Dramatic Publishing, she âlet it go.â This allowed her to focus her creative energy on other projects, writing one or two first drafts a year since.

Director Kathy Pingel, who directed the first in this series, returns to guide GW2. As a veteran director, this project proved to have special allure which appealed to her.

âWe talked about a sequel for âGirlsâ Weekendâ in the dressing room on opening night. Karen is a savvy writer who knows what her audiences want. After it was published, she heard laughter across the nation as more and more theatres met Meg, Dot, Ellie and Carol (the anchor characters in the show),â reflected Pingel. âYou couldnât have kept me away.â

A cornerstone of GW2 is the return of the core cast. Each developed Schaefferâs roles with such layering and nuances that the opportunity to have audiences continue the journey with them proved pivotal.

âWeâre all a few years older now, and that brings fresh perspective to the story,â Pingel shares. âWhat has not changed is the dedication of the cast and the trust it takes to be outrageous.â

Schaeffer continues the unique evolution of this âGirlsâ Weekendâ franchise as she describes the special motivation for GW2.

âCharacters have always spoken to me, but in this case, I hear the actorsâ voices when Iâm writing lines for their characters. I can see them on stage. I know how they move.â Having developed her talents on the stage undoubtedly helped guide her skills in conjuring great characters and engaging dialogue.

Her phone is her museâs scribe. She admitted that she âhas a list of ideas waiting, including âGirlsâ Weekend 3.â â Three world premieres in nine months. Greater Des Moines gets to experience one of them with Iowa Stageâs premiere of âGirlsâ Weekend 2: The Bachelorette Party,â which opens April 29.