Leaving the 2021 holiday performing arts season in the rearview mirror

The glow of holiday arts has never felt more vibrant.

Last year, the world of live arts experienced a pandemic-caused paucity of performances. Producing companies eagerly prepared a month of shows to feast upon. 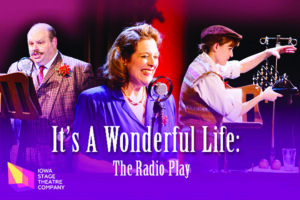 The Des Moines Community Playhouse renews its holiday show big musical tradition with âThe Sound of Music.â With music by Richard Rodgers, lyrics by Oscar Hammerstein II, and a book by Howard Lindsay and Russel Crouse, this musical is revived regularly to share the joy of the best in musical theatre. This story is based on Maria Von Trappâs 1949 memoir. âThe Sound of Musicâ runs Dec. 3-19.

The holiday season would be wanting without âThe Nutcracker.â The strains of Tchaikovskyâs magical passages are touchstones for many a familyâs holiday tradition. âThe Nutcrackerâ often is the first live performance young ones experience. The Civic Center stage will resonate with this great ballet story presented by Iowa Dance Theatre (IDT) Dec. 11 and 12. IDT renews its multi-decades legacy through this famous ballet.

Ballet Des Moines (BDM) will produce its version of âThe Nutcrackerâ at Hoyt Sherman Place Theatre Dec. 10-12, then move its show to the Staplin Performing Arts Center in West Des Moines Dec. 17-18. BDM will showcase 10 professional dancers, representation from 34 dance studios from across central Iowa, and new scenes add a special spark to their 2021 show.

Two shows opening Dec. 3 are guaranteed to produce plenty of laughter in their respective performing halls. Tallgrass Theatre Company (TTC) and Ankeny Community Theatre (ACT) spice up the seasonal offerings with âEvery Christmas Story Ever Told (And Then Some)â and âGeezers,â respectively.

TTCâs show brings something very special to the region: a new performing arts campus. This well-established company, founded in 2002, has more or less served as West Des Moinesâ community theatre. The pandemic challenged TTC even more as their current lease expired just prior to that. They found a remarkable space at 2019 Grand Ave., West Des Moines, giving them a larger performing hall with added capacity for a scene shop, plenty of rigging space and additional rooms.

TTC presents âEvery Christmas Story Ever Told (And Then Some)â Dec. 3-19. This madcap romp brings a potpourri of pleasure as three performers decide to perform every Christmas story ever told, plus Christmas traditions from around the world. Up tempo and uplifting, this promises to be a memorable christening to the new TTC space.

Ankeny Community Theatre offers an evening of laughter with a show whose very title should elicit a giggle or two, âGeezers,â Dec. 3-12. When a young man is hired to help seniors in their retirement home, it turns out that this shy twentysomething is the one who gets lots of help.

Theatre Midwest brings its next Fresh Produce offering to the stage in a concert reading of âDairy Queen (or, Our Sovereign State)â Dec. 4 and 5. This event can be experienced in-person or online, and is free â although, goodwill contributions are welcome.

Add a kickoff for December on the 1st from Des Moines Young Artistsâ Theatre as they present a new round of the popular showcase entertainment, âDuets.â One veteran musical theatre performer is paired with a rising star, and past performances have been especially rousing.

It appears as if our theatrical stocking wonât be filled with lumps of coal this year, but rather an enticing array of performing arts. Book your dates and experience as many of these shows as possible. ♦