Broadway shows back to Des Moines.

With the exuberance of an oxygen-starved swimmer gulping in a huge breath of air, many of the regionâs best musical theatre performers are expanding their lungs to sing to the rafters. Musical theatre takes center stage in July. Musicals have proven to be the most challenging style to present post-pandemic. Most shows require large casts and crews. Good times are ahead for lovers of singing on stage.

Tallgrass Theatre Company lost its lease for their space. Before the pandemic. The search was on, and a new space was found. Then, COVID. This resilient, never-say-die troupe weathered adversity that would have closed many others. Tallgrass partnered with West Des Moines Parks and Recreation to present two productions at the Jamie Hurd Amphitheater. The first was a rousing success, a concert-style performance of âThe Bridges of Madison Countyâ at the end of June. Lest you feel crestfallen for having missed that gem, Tallgrass is giving another free musical theatre experience to the community on Saturday July 17 â âAn Evening with Sondheim: A Musical Theatre Cabaret.â The surrounding hills will be alive with music as exceptional performers share the charm, wit and lyricism of Sondheim with audiences. Get re-acquainted with Tallgrass as they prepare new productions for the future. 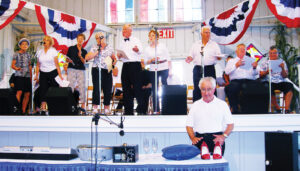 The Playhouse broke the performance drought last year with their innovative drive-in theatre. Enthusiastic crowds loved it. Their innovative approach continues under the big top with Tent Theatre this summer, beginning with the beloved musical âGodspellâ (opening July 9). They companion this musical with Neil Simonâs comedy, âPlaza Suite,â running in repertory, beginning July 16. For young audiences, the musical âPolkadots: The Cool Kids Musical,â begins the first of five Saturday performances on July 10.

Final Act Ensemble (FAE) also returns with its trademark live audience radio studio style show with a comedy featuring a Burns and Allen sketch (âGeorge Meets a Hit-Manâ), a Fibber McGee and Molly bit called âFibber Gets a Hundred-Dollar Bill,â and previews of coming FAE attractions, whacky commercials, and a couple of favorite songs. One night only July 27.

Urbandale Community Theatre also returns with its annual summer musical. The biblical story of Joseph and his trials and tribulations has never been more enjoyably retold than in the popular musical, âJoseph and the Amazing Technicolor Dreamcoat.â This extravaganza of bouncy tunes and campy fun opens July 23 and will be presented in the spacious Franklin Junior High School performance hall.

âWe are so pleased that even with the uncertainty of the past 14 months, over 10,500 season ticket holders to our Willis Broadway Series remained committed to us,â said Chelesvig, âand that we can now share with them when Broadway will return to the Civic Center.â

With DMPA ready to fully launch its Willis Broadway Series, and regional companies ramping up plans, the hopes for a 2021-2022 season full of shows looks promising. Who knows? Perhaps the Cloris Awards will even be able to renew their celebration of the local theatre scene. Sally forth, patrons of live theatre, and prepare for a bounty and renewed appreciation of the performing arts.