âThe Four Days of xMasâ gives one of the metroâs newest venues its holiday christening. 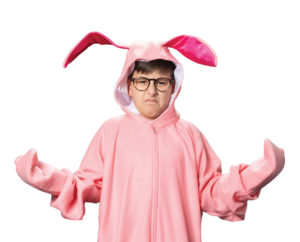 A variety of Christmas-themed shows dominate the performance scene in our market this December. The Des Moines Community Playhouse, Ankeny Community Theatre, xBk Live, and Iowa Stage Theatre Company each have a show with âChristmas or Xmasâ in its title. âA Christmas Story: The Musicalâ opens Dec. 6 at the Playhouse. The play version of Jean Shepherdâs classic will be presented at Ankeny Community Theatre beginning Dec. 6. Iowa Stage Theatre Company will present a new adaptation of Charles Dickensâ âA Christmas Carolâ beginning Dec. 13. xBk Live, one of the metroâs newest performance venues, will present â4 Days of xMasâ beginning Dec. 12. It appears that four of the 12 days of Christmas have something to consider.

Two companies give theater-goers a unique opportunity to compare the musical and stage versions of the same endearing story that became a holiday staple decades ago. Jean Shepherd gathered pieces from his memoir writings, âIn God We Trust, All Others Pay Cashâ and âWanda Hickeyâs Night of Golden Memories,â to comprise âA Christmas Story.â Nostalgia blossoms in full growth as a script filled with memorable moments in Ralphieâs burgeoning life unfold, complete with his unyielding passion to acquire a coveted Red Ryder carbine action 200-shot range model air rifle. (All together now: âYouâll shoot your eye out, kid.â)

Shepherd not only wrote the original stories but also the script for the classic 1983 MGM feature film. It was his voice that so memorably narrated as the older Ralphie reminisced about his childhood. He even made a cameo appearance as a man waiting in line in the iconic department store Santa Claus scene. This story is infused with Shepherdâs gift for capturing a universal sense of growing up and reflecting on such times through rose-colored glasses. Shepherdâs early short stories were read by him on his early-career radio program and were printed in Playboy magazine â probably one of the truthful things when Playboy readers said, âI like it for the articles.â

Bringing a more classical tone to the season is Iowa Stage Theatre Company and new-to-Iowa adaptation of Charles Dickensâ âA Christmas Carol.â After several years of using director/producer Larry Carpenterâs adaptation, along with Jay Jagimâs evocative scenic design, Iowa Stage decided it was time to reboot this classic through a new lens.

âThis year we are bringing a never-before-seen in Iowa adaptation of âA Christmas Carolâ to Des Moines,â shared Artistic Director Matt McIver. After reviewing many scripts, a committee unanimously decided that Michael Wilsonâs 1980s version was the best fit for the Stoner Theater (where ISTC presents their shows). Jagim knew the script well â it was created at Houstonâs Alley Theater when he was the resident scenic designer and was involved in developing the story and concepts with Wilson.

âItâs an exciting version that gives family-friendly spectacle, laughs, chills,â continues McIver. Fans of ISTC will be pleased to know that this new cast includes returning veterans Richard Maynard (as Scrooge) and Shawn Wilson (Christmas Present), both Cloris Award winners for these roles.

âThe Four Days of xMasâ gives one of the metroâs newest venues its holiday christening. Charlie Reese and Madison Ray team up for a variety show celebrating some favorite holiday classic movies featuring the A-Sisters, Dante Powell, Dominique Morgan, Mae the Force, Hester Mofet, Poni Lejukole, Sydney Allen and a few surprise guests. Look for an eclectic and appealing mix of performance, visuals and music. This all-age show also features Madison Ray and the Finesseâs release of their first Christmas album. All happens at xBk Live in the Drake University neighborhood.