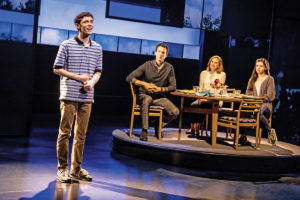 The holidays are behind us, and February continues the ramping up of indoors offerings so Central Iowans can experience the unique thrills of live theatre arts.

This compelling musical revolves around a young man with a social anxiety disorder. He craves a connection with his peers. The death of a fellow student provides Evan Hansen an opportunity. He fabricates a relationship with the boy, who had committed suicide. The lie keeps spinning into greater complications, leading Evan Hansen to make an inevitable ethical choice between truth and lie.

With a powerful pedigree of a Tony (1966) and an Academy Award (1968), âThe Lion in Winterâ powers its way onto the Iowa Stage Theatre Companyâs (ISTC) Kum & Go Theater stage beginning Feb. 22. Director Shawn Wilson sums up the rationale for âLionâ as this seasonâs anchor classic. â âLionâ has been out of the theatre consciousness for a while. With the success of a show like âGame Of Thronesâ (which has some very similar dynamics,) it’s a great time to revisit the Plantagenet family.â

That teaser quote, plus the strong reputation of ISTC in their quality production and performance values, means that âLionâ holds great promise for delivering a taut, dynamic theatrical experience. This story draws several distinctive characters together for a holiday gathering. Wilson shares his attraction to this script.

âI can tell you why I love it…why it’s appealing to me. The dialogue in this show is rich and biting. In the vein of âWho’s Afraid Of Virginia Woolfâ and âGame Of Thrones.â It’s that good. The characters are strong and dynamic. No one has a distinct advantage over anyone else, yet everyone has specific strengths and weaknesses. The game they play with each other over the holidayâ¦will continually leave you guessing and on the edge of your seat.â

And, on a lighter noteâ¦

âYouâre a Good Man Charlie Brownâ opens Feb. 15, the next Des Moines Young Artistsâ Theatre show, giving local audiences the opportunity to dive into the humor, wisdom and life lessons as conveyed by Charles M. Schultzâs beloved âPeanutsâ characters. Under the co-direction of Libby Waterbury and Adam Yankowy (also serving as the musical director), and choreography by Marco Masteller, this show will vibrate with energy and talent.

DMYAT has a well-deserved reputation for bringing in top production team talent, and âCharlie Brownâ is another such show. What separates this version of the show from others is that DMYAT fills the cast with talented youth, often from many different area schools. This organization has become a creative magnet in giving young, aspiring performers a platform on which to excel. The results are rewarding for those involved in productions and for the appreciative audiences who experience such unbridled exuberance.