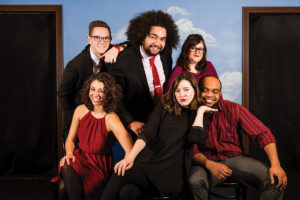 When it comes to improv comedy and the greatest chain of memorable comedians developed through one program, Second City plays second fiddle to nobody. The collective wit and charisma are music to the ears of most anyone who savors the sweet sounds of masterfully delivered comedy, from content to impeccable timing. The next workout for your funny bone begins April 10 in the Temple Theater, through Des Moines Performing Arts, and is aptly titled, âLook Both Ways Before Talking.â

A recent conversation with Jeff Griggs, director for this touring show, reveals the deeply instilled sense of legacy and dedicated work. When asked about the process, Griggs gives us a peek behind the curtain.

âWe do things that are a little different than what other writers do. We generate a lot of our material through collaboration. We bring everybody together in a room. Weâll throw around some ideas or pitches, and someone comes up with an idea, and we put it on its feet,â he shares, like a comedic mad scientist running the laboratory. He tells how the team continues working on it, tweaking, improvising, then putting it on a stage, after which the work goes through fine tuning.

âThen, itâs finally ready to put in front of an audience. We discuss what worked, what didnât work, try a couple more things out. Weâll test it out two to three times, maybe even more, to see whatâs working and whatâs not. Sometimes we think that some things that are going to be amazing donât work, and we just have to scrap them. And other things that have a morsel of something, we take back through the collaborative process, even with an audience, and build it into something that works.â

Then, Griggs continued, they are comfortable enough to tour the script or put it up on stages in Chicago. When asked what he thought about joining Second City and its rich history, he talked about its people.

The conversation returned to his directing technique. He responded to what he looked for in company members with, âItâs an interesting process. I want people who collaborate the best, the people who are funny and everybody gets along with. People who are open to other peopleâs ideas and are ready to take improv skills and push together scenes and a product that makes it fun for everybody watching as well as everyone in the show.

âWe have a very eclectic, diverse group of funny people. In comedy, you have to sing, dance; we have to make you laugh, cry. So, we need to be able to pull in as many variables as possible. One of the great things is that, whenever we come to a town like Des Moines for an extended time, people often will see the show more than once. There is a nice amount of improvisation, so the show is never exactly the same. We get suggestions from the audience, so it goes in different directions every night.â

As you cross a street on your way to experience Second City in the Temple Theater, be sure to look both ways. Before walking, that is. Leave the talking to the pros, under the masterful direction of Jeff Griggs.

Overheard in the Lobby: