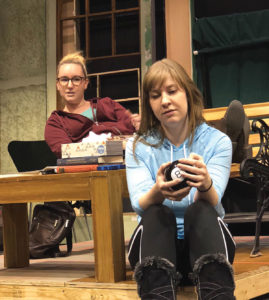 A tenacious theatre company continues its steadfast growth, thanks to a solid core of dedicated volunteers, judicious use of resources, and some innovative programming.

âTallgrass Theatre Company was founded in 2002 by me and James Stephenson,â explains Jessie Phillips, the companyâs executive director. âOur first shows were in the Vaudeville Mews,â she continues. During its formative years, the Mews was known for pioneering a variety of cultural offerings, from theatre to film festivals.

My, how things have changed. The school district allowed remodeling of this space, Tallgrass the sweat equity and investment. The stage evolved into todayâs much more accommodating space, giving each production enough elbow room to craft excellent shows, while giving audiences one of the best intimate performance experiences in central Iowa. Tallgrass recently invested more than $35,000 through grants and private donations for a new LED lighting system. The driving force of this growth has been Tallgrassâ steadfast cadre of theatre devotees who give countless hours to produce, direct, develop and otherwise perpetuate the dream of the Tallgrass founders and a growing base of patrons.

In 2012, two of this regionâs veteran actors, Micheal Davenport and Shawn Wilson, approached Tallgrass with an idea. They had a desire to tackle Sam Shepardâs âTrue Westâ but needed someone to produce their vision. Not only did they want to perform this daunting script, but they wanted to swap roles on alternating nights. This had never been done in this market, but the Tallgrass board was receptive. The cast was completed with two more stage veterans, Joe Smith and Mary Bricker. Tom Perrine, now Tallgrassâ artistic director, directed this show. The show proved as gratifying for the dreamers as it did for its audiences, and Tallgrass realized they had something special. This initial Dream Project was followed in successive years by âIndependence Day,â âHillary: A Modern Greek Tragedy,â and âOleanna.â

This year, the Dream Project is designer rather than performer driven, as Erica Spiller (who also directs this show) and Ty Klobassa bring âStop Kissâ to the stage beginning Jan. 19 for three weekends.
âTy and I began discussing a Dream Project where the Tallgrass design team, who have consistently worked together, could have an opportunity to engage in a production where the designs can communicate in as equal a voice and presence as the actors on the stage,â shares Spiller.
Why this script? â âStop Kissâ provides a sort of blank canvas from a design perspective,â she continues, âwhich opens the door for creativity and allows the design to have its own voice and influence.â
First performed in 1998, âStop Kissâ is the story about an attack on two women â Callie and Sara â because they kissed in Central Park. Sara falls into a coma. The non-sequential story line allows relationships to develop, as the audience learns how the relationship developed, and the subsequent physical and emotional fallout from this hate crime.
âBy producing a Dream Project that is designer-driven,â Perrine explains about this seasonâs offering, âTallgrass Theatre Company shines the spotlight on the talented people who put in thousands of hours of work on a production, but rarely get to take a âbow.â â

For regional talent, getting support to produce a show of their choosing can be, indeed, a dream come true.