Thursday, February 2, 2023
Join our email blast
Cars in the City

Mustang set up in photo room

Typically in this column, we feature shiny new cars with backup cameras, massaging seats and automatic liftgates. These features make safety a top priority, along with comfort and innovation.

Sometimes comfort is overrated, and we want to relive our youth by scooping the loop in a car with a revved-up engine. Or wonder about our grandparentsâ vehicles, where there were no automatic windows or air conditioning. You can turn back time with a classic car.

My step back into another car generation landed me at American Dream Machines in Des Moines. The place, located at 1500 Locust St., was formerly a 1929 Packard dealership. It also housed a Ford dealership and Dave Ostrem Imports. 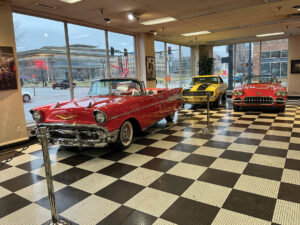 American Dream Machines was founded by Doug Klein, who was running out of garage space at home due to his own car collection. He opened the place in 2003.

Featured vehicles included classic American âmuscleâ cars like the Mustang, Chevelle, Blazer, Camaro and Corvette â which make up about 20% of inventory.

When walking into the showroom, most people confuse it for a museum. The nearly century-old original black-and-white floors display more than a dozen spotless, spit-shined cars behind theater-rope barricades. Lining the walls are another passion of Kleinâs: hundreds of rock ânâ roll albums, movie posters and musician and band memorabilia.

As I reached out to touch the chrome, I suddenly saw the sign: âNo touching.â Would anybody see me? This probably meant I couldnât even sit in one or test drive it.

Lynn Nichols, assistant manager, said they could give a test ride. âNot a test drive. It cuts down on those who arenât serious about it and gives us more protection,â she explained. Unfortunately, the recent Iowa snowfall prevented Lynn from taking me for a spin. 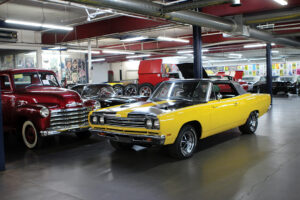 Dozens of other classic cars are housed in the back room.

Patrons tend to be Baby Boomers and beyond, buying cars from their youth. Billy Joel purchased a Volkswagen Super Beetle from 1973, the year he recorded âPiano Man.â

The majority of cars are purchased sight unseen. With my luck, Iâd get a car where you canât adjust the seat and Iâd have to prop a pillow behind my back to reach the pedals.

Cars are also located in an underground garage and the mechanic room. Seventeen employees include mechanics, detailers and body guys who were working under cars on lifts or with their noses under the hoods.

One unique feature was the photography room. An all-white fade-away room stages the cars expertly for snapping detailed photos. Luckily, a red Mustang was set up for my photo session.

What does the future hold for classic cars? Lynn wants to get younger people interested in cars, as the older generation is fading away.

âItâs all about nostalgia. Back then, youâd see a car and know it was a Chevy. Today, they all look the same,â she said. âWe need to show the younger generation how cool it is â thatâs what will keep this alive.â ♦