Be our guest â Iowaâs hotel industry is recovering from a pandemic and evolving for the future.

Those looking to reserve a hotel room can find just shy of 800 hotels in Iowa â and a lot of vacant rooms. Like many businesses, hotels suffered hard times when COVID-19 hit pandemic levels. While many are well on the way to recovery, others still grapple with a change in business model, a slim workforce and low occupancy rates.

In March 2020, before the COVID-19 pandemic shuttered the country, the Iowa Lodging Association disbanded. This left the lodging industry without a voice when they needed it most. Two years later, Jessica Dunker, president and CEO of the Iowa Restaurant Association, was approached by some restaurateurs who also owned hotels. They needed a voice. In response, the Iowa Hotel & Lodging Association was formed in January 2022. 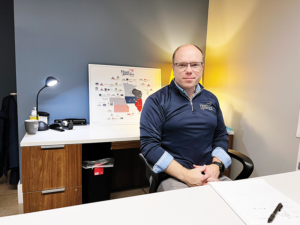 Scott Math is the vice president of operations for the Heart of America Group. Photo by Colson Thayer

An industry ravaged by COVID

âHotels were dramatically impacted by COVID,â Dunker said. âItâs hard to imagine how a lot of these hotels made it through.â

Because traveling was almost entirely halted during the early months of the pandemic, hotels needed to act quickly to stay afloat. Data released by the American Hotel & Lodging Association showed that 70% of hotel employees were laid off or furloughed across the country. Iowa shared a similar fate.

Hotels were also forced to accumulate debt while their occupancy rates stayed low.

â(Hotels) were decimated, but they still had to pay property tax,â Dunker explained, adding that some hotels that werenât open had property tax costs of as much as $35,000 a month.

Dunker pointed to a lack of government assistance for the industry. âThe one piece of the hospitality industry that got no special carve-out program were the hotels,â she said.

Restaurants, venues, musicians, breweries, and the arts qualified for grants and other assistance from the state and federal levels, but hotels did not.

âWhat happened during COVID is we didnât have any grant programs for hotels, but we did have the option to take out loans,â Dunker said.

Hotels qualified for the Paycheck Protection Program (PPP) and Economic Injury Disaster Loans (EIDL) among other assistance, but they did not have programs like the Restaurant Revitalization Fund (RRF) or the Shuttered Venue Operators Grant (SVOG) that did not require repayment. 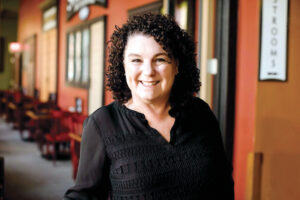 Jessica Dunker is president and CEO of both the Iowa Restaurant Association and the Iowa Hotel & Lodging Association. Photo submitted

One year ago, Dunker and six board members formed the Iowa Hotel & Lodging Association. The group is an advocacy organization that works at the state level with legislators, the governorâs office and state agencies to make it easier for hotels to do business in the state.

Along with COVID-19 recovery, a few issues were of top concern for Dunker and the association. In 2021, the governor and secretary of state became interested in human trafficking prevention. A law passed in 2021 became effective Jan. 1, 2022, requiring every lodging establishment where state money was spent to do mandatory human trafficking training. However, only 17 hotels had completed the Iowa Businesses Against Trafficking (IBAT) training by Dec. 31, 2021. Dunker said the hotels did not mind doing it, but no group existed to communicate the law to the industry.

Another major concern started in 2021 when a huge effort was made in the legislature to raise the Des Moines market hotel-motel tax by 3%, but the hotel industry was not aware of it.

âAll of that money would have gone to underwrite public transportation or DART,â Dunker claimed. This push was reintroduced in 2022 before it failed once again.

âCOVID was a catalyst for the entire hospitality industry,â said Dunker. She outlined three major shifts the industry will experience in the coming years: a change in service with fewer employees, creative hiring and workforce retention efforts, and automation of tasks like reservation or laundry. 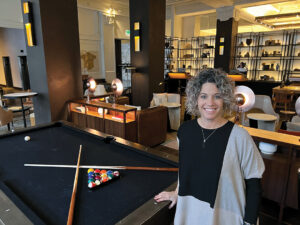 Tara McFarling is director of sales for the Surety Hotel. Photo by Colson Thayer

Scott Math is the vice president of operations for the Heart of America Group, which operates a variety of boutique and chain hotels throughout the Midwest. Their portfolio includes The Rewind Hotel in West Des Moines, both the Revel Hotel and Hotel Renovo in Urbandale, and a variety of Hilton, Marriott and IHG properties.

âWe wear a lot of different hats,â Math said of hotel employees. âIn the hospitality industry, the guest doesnât care who it is (that does the job).â

Math said cross-training was the model even before the pandemic.

âThere are some operational things that are very different in most Iowa hotels right now,â explained Dunker. One of them includes housekeeping not coming into the rooms each day. Many hotel chains, like Marriott and Hilton, only offer daily housekeeping by request. Another service being dropped by many hotels is room service.

Staffing continues to be a challenge in multiple states for the Heart of America Group. However, Math said they try to do everything in their power to avoid slow service.

The reality is the people who left their jobs in the hotel industry arenât coming back. Industry leaders recognize this and are relying even more heavily on an immigrant and refugee workforce. Building maintenance and housekeeping positions, for example, are jobs that can be filled by those who do not speak English.

âThe nice thing about a hotel is that you can be new to the country and a second-language speaker, and you can work on a crew. Perhaps the crew leader is bilingual and can communicate with the owner or the general manager,â said Dunker.

Both Dunker and Math are encouraged by grants and initiatives that make it easier to hire a non-English-speaking workforce. In October, Gov. Kim Reynolds announced the Iowa Language Learners Job Training Program intended to support employer programs that improve English language proficiency among employees.

On the other hand, Dunker said she is not worried about the hotel management side of the industry.

âWe will be able to find educated hospitality management people out of Iowa State or out of DMACCâs program. Those folks are replenishing with their educational choices. But that entry-level position, where youâre giving somebody a first opportunity or a second chanceâ¦ those folks are fewer and fewer in number, and that can only be solved at the federal level because we have to have immigration reform.â

According to Dunker, âThe state canât do anything about it.â

Located downtown on Sixth Avenue, the Surety Hotel is one of Des Moinesâ newest hotel offerings. So new, in fact, the hotel never saw a pre-COVID world. The staff knew it was going to be a challenge opening in November 2020, when the industry was in shambles.

Tara McFarling, director of sales for the Surety Hotel, explained they wanted to fill the needs of the downtown community.

âWhen we first opened, we really focused on what people were craving at that time. People had not been out to eat; they hadnât been to see any sort of live music. There was very little socialization obviously during COVID.â

The Surety Hotel uses its historical architecture to create a unique experience for guests. Occupying a former bank and office building, the hotel makes sure to feature local art, furniture, coffee and food. The experience at the Surety Hotel is not something found at a branded hotel.

âWe really believe in giving this back to the city,â McFarling said.

In 2021, the Surety slowly began to see an increase in guest bookings. In 2022, they had more than 50 couples book their weddings at the hotel.

But the Surety was not able to avoid the challenges faced by the entire industry.

McFarling explained, âRight after we opened, we were without full staff for a very long time.â

One of the biggest trends Dunker is excited about is âBleisure,â the blend of business and leisure, that encourages corporate travelers to bring their partners and children along on business trips.

The Iowa Economic Development Authority and Iowa Tourism Office has recognized bleisure travel and created the âMeet In Iowaâ program. When an organization creates a meeting or conference in Iowa with a overnight hotel stay and a tourism experience on the front or back end of the trip, they can get up to $25,000 of the cost back.

The program is âwildly successful,â according to Dunker; however, not all hotels are seeing the same results.

âWe are starting to see some of [bleisure] in some of our markets,â Math said. âIt hasnât been a whole bunch.â

â[Bleisure] is not coming to Des Moines as much as you might think,â McFarling said.

In other developments, as the hotel industry responds to the new reality of hybrid and virtual work, Math and the Heart of America Group are working to upgrade properties with high-speed Internet and updated audio and visual equipment in their meeting spaces.

An industry veteran, McFarling has recognized more short-term booking windows. Large conferences and events were often booked out nine months to a year; nowadays, they are within six months. Business travelers now book their stays within seven or eight days.

âIt has changed a lot of the strategies that we have in play for how we price and how we sell our spaces and guest rooms,â he said.

As with many other industries, hotels are adapting and rising up to the challenges of the times and the changing needs and preferences of their customers. With a new association now in place to represent and lobby for the industryâs concerns and to improve communication about issues facing hotels, the industry is better prepared for what is ahead. And, while not yet reaching pre-COVID occupancy rates, the numbers are improving â providing optimism for the future. n