Released in 2007, âThe Story of Stuffâ is a short film about material goods. Narrated by Annie Leonard, the 20-minute film exposes the truth behind material goods: where they come from and where they go. The film claims that 99% of things harvested, mined, processed, transported and consumed are trashed after six months. Only 1% of materials are still in products being used six months after their date of sale. This statistic begs the question: Do we live in a throw-away society?

President Eisenhowerâs Chairman of the Council of Economic Advisers said the economyâs âultimate purpose is to produce more consumer goods.â Since World War II, that has been the American reality. Retail and online sales have grown immensely, and the number of options for consumers continues to expand. With ânewer and betterâ models regularly introduced for so many consumer goods, shoppers are increasingly inclined to buy new even before a product needs to be repaired or replaced. For those wanting repairs, the options have dwindled.

Today, fewer shops and businesses are dedicated to repairing goods. The few that remain are often one of two â if not the only â repair shop in their field in the area. As the owner of one Des Moines area shoe repair shop put it, âWeâre so busy we canât stay caught up with ourselves.â The lack of options for repair means these one or two shops are getting all the business, and, oftentimes, creating a waitlist for those who need service. 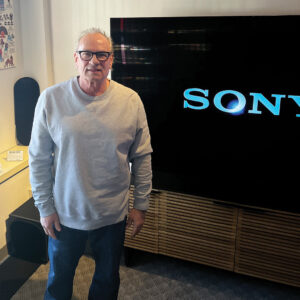 Randy Traviss says fewer people are repairing televisions and appliances, opting instead to replace them with new models and technology. Photo by Colson Thayer

Traviss Video opened in 1949, primarily as a service company. Back then, both audio and television technologies were new. Often, the only television or radio families had were the ones in the living room, and, if there was a problem, a call was made to the repair shop. Randy Traviss, the owner of Traviss Audio and Visual, explained that, 30 years ago, about 20 shops in the area serviced audio and visual technology. Over time, those options dwindled as fewer people called for repairs. To match those trends, the Traviss business model had to shift. Over the years, the business evolved to include retail sales, with 80-85% of Travissâ business now being retail, and only a small portion being service. Even so, Traviss Audio and Visual still offers both in-store and in-home repair and service.

âI remember going on service calls with my dad back in the 1960s. At that time, they had about four outside service techs,â he said. Each of those techs worked on about a half-dozen pieces of equipment daily for a total of about 20-25 pieces each day. At its highest, Traviss had 15 technicians either in-store or in-home. Today, Travissâ Urbandale store employs four service technicians, which he said is more than other stores in the area.

Additionally, technology has become more reliable over the years, so audio and visual equipment does not require as much maintenance.

âEven a TV that lasts five, six, seven, eight years â oftentimes, the first time a consumer has a problem with a set, they will just opt to buy a new one, without even thinking of repair,â said Traviss.

Another issue that contributes to continued waste is that consumers continue to buy cheap products that are typically not sold to be repaired. All kinds of low-quality products sell at low prices. A cycle begins where someone will buy a $300 TV on a Black Friday sale, and, when it breaks, it is not worth repairs so they buy a brand new âpiece of crap,â as Traviss called them.

Is it even worth it? 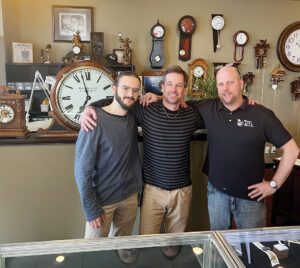 Parker Boughton, Phil Squiers and Jeff Goemann at Windsor Clock and Watch Co. take time to make sure that the intricate work of clock and watch repair is done properly.
Photo by Colson Thayer

A common phrase heard by anyone in the repair industry is, âIs it even worth it?â

Parker Boughton at Windsor Clock and Watch Co. in Clive says he hears the question about three times a day.

âPeople are always asking me, âIs this even worth it?â Iâm like, âWell, what does it mean to you?â â

A lot of the timepieces Boughton works on are antiques that are not worth much but have sentimental value. Repaired antique clocks that have been around for years will last longer than a cheap big box store clock that will last five years, and Boughton thinks it is worth making the investment to repair them. He says he loves seeing the clocks he works on going out the door working. 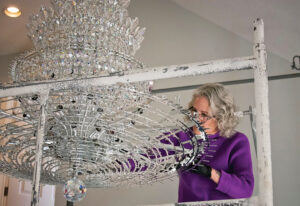 Peggie Shultz is the Lampinâ Lady. She repairs antique lighting â a task that has her busy enough she has to turn away work.

Peggie Shultz is also in the business of repairing antiques that can continue to be used for years to come. Schultz runs a lighting repair company and calls herself the âLampinâ Lady.â She specializes in lighting, more specifically the cleaning, restoring and repairing of antique lighting. With this kind of specialty and focus, Schultz has been known to travel to provide her repair services.

Traviss suggests considering how old something is and how much was spent on purchasing a product when deciding whether or not to repair it. For example, he says somebody who spent $1,000 on a TV two years ago has no business throwing away their TV. It would be a mistake if a repair would only cost $100-$200.

How long will it take?

Any repair takes time, and, with such limited options for repair services in the area, it might take quite a while to get a product back â another reason why some prefer to buy new. At Traviss Audio and Visual, technicians generally start repairs within a few days of receiving an item. The time needed for repairs depends on what the problem is and whether or not a replacement part must be ordered. For the most part, Traviss estimates a one-week turnaround for most equipment.

On the other hand, the Lampinâ Lady runs a one-woman operation. Schultz holds on to several repairs in her house at once and has repairs waiting for her. In fact, this year she had to turn down a large account because she would have had to tell all of her other customers to wait.

At Windsor, Boughton prefers customers leave their products with the team. He said jobs done quickly are likely to also be done sloppily. Some repairs, like a watch battery replacement, will take almost no time at all. But for more intense jobs, they need to take the piece apart and ensure it will operate correctly. Most in-store repairs might take about three to six weeks. However, orders are backed up, and the shopâs waitlist is about three months.

As obvious as it may seem, those in the repair industry agree it is generally worth it to get things repaired. They do not think a customer will regret investing in repairs over buying new. Too many times, they have seen good products end up in the trash when a little service could have put them back in use.

âIf you got something you like, absolutely repair it,â Schultz said. ♦