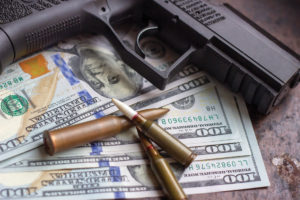 Sales of ammunition and guns have increased after the coronavirus spread to central Iowa.

The owners of RR Gun Sales in Mitchellville began experiencing an uptick in sales in mid-March, both via phone and in person. At the time, owners were on hold on the phone with wholesalers inquiring about product and when it would be available. As a customer came in and inquired about ammunition, he was told it wouldnât be available in a few days, based on sales.

The increase in sales follows a nationwide trend. In March, April and May, there was a surge of sales of rifles, pistols and shotguns, and
nationwide stocks of ammunition hit record lows in the first part of July, according to GunBroker.com, one of the worldâs largest online auction sites for firearms and hunting/shooting accessories.

Nationwide, the increase is credited to safety fears from protests, riots and the coronavirus pandemic, but also because more people are
outside. Thereâs been an increase in hunting licenses in the state as well.

Here are five things to know about gun sales in Iowa:

1. Sales fluctuate amid many factors

In addition to recent national events, sales also fluctuate according to the political climate.

Randy Ridgway, who started RR Gun Sales, says sales fluctuate depending upon who is president.

National experts say protests, riots and looting across the country have led to some taking arms. Online footage has surfaced in many cases of armed business owners and residents protecting businesses and property from rioters and looters. Most recently, a couple in St. Louis was shown pointing guns at protesters.

Other experts say another source of concern for gun buyers may include potential gun control proposals from Democratic presidential nominee Joe Biden and some statesâ new gun restriction laws.

Prospective buyers can purchase guns from a gun shop or anyone who has a Federal Firearms License.

âIf someone has the license, theyâre reputable to buy a firearm from,â says Joe McCreery, a partner of Ridgway at RR Gun Sales for the past 10 years.

2. Buyers must undergo a background check, get permits

When a person tries to buy a firearm, the seller, a federal firearms licensee, must contact the NICS electronically or by phone, according to the FBIâs website. The prospective buyer fills out a Bureau of Alcohol, Tobacco, Firearms and Explosives form. That formâs information is sent to NICS, which conducts a background check on the buyer to certified the person does not have a criminal record or any other flag that would make him or her ineligible to purchase or own a firearm.

Anyone who purchases a handgun in Iowa is required to have a permit to purchase or a permit to carry, according to Iowa law. The buyer must be 21 or older. This permit can be obtained from the county sheriffâs office where the person lives and is valid for one year. To buy a handgun in Iowa, the person must be a resident of the state. A person who acquires a handgun without a permit can be charged with an aggravated misdemeanor.

The exclusions to the permit are antique handguns, those that are not capable of being restored to fire condition, those that have been determined a âcollectorâs item,â those that are purchased by someone who already has a handgun carrying permit, or handguns that are transferred between certain relatives/family members.

Long guns, such as rifles or shotguns, donât require the same permit and can be sold to residents of neighboring states, but the buyer must follow his or her own stateâs laws for purchasing and carrying the weapon.

âWe personally only sell to residents because we donât want to have to follow up with the other stateâs laws,â McCreery says.

Proof of residence, identification and a permit are required for each purchase at RR Gun Sales.

âEven if you bought from us before, you still have to have a permit and driverâs license to buy another one,â McCreery says.

3. What about private gun sales?

Those who make occasional sales, exchanges or gift a firearm are not required, in most cases, to have a Federal Firearms License like gun shop owners, according to the National Rifle Association. They do still need to abide by any other local, state and federal laws.

Some states do not allow private sales â Iowa does â and there could be restrictions. It is illegal to sell a firearm to a resident of another state without going through a dealer. Sellers also cannot ship to a non-FFL buyer in another state, nor can one sell to a convicted felon or any other prohibited purchaser.

While firearms purchases are allowed from private individuals, McCreery cautions buyers to know the person. The buyer still needs to have a permit to own the weapon.

âIâve bought firearms from friends,â he says. âIf itâs someone I personally know and trust.â

In March, Ridgway accepted a gun into his shop for cleaning, while he talked to the owner about handguns. A customer asked about 40-caliber handguns.

Ridgway told the man the 40s he has in stock are at his price or $5 above because their popularity has gone down. Nine-millimeter handguns are more popular because they have less recoil, he says.

The purchase of a new or used firearm is kind of like buying a car, McCreery says.

RR Gun Sales will purchase one or two of the same weapon unless they know itâs popular, McCreery says.

âIf itâs something weâve had a lot of luck with, or think we will, we might buy half a dozen,â he says.

During deer season, shotguns and rifles are most popular, though sometimes thereâs no rhyme or reason to what someone purchases. Sometimes items that appear in shooting magazines or have been talked about become popular to acquire. Usually, the uptick in ammunition and sales starts in September through December right before deer, rabbit or goose hunting season. Deer season is usually the most popular time for sales at RR Gun Sales, McCreery says. 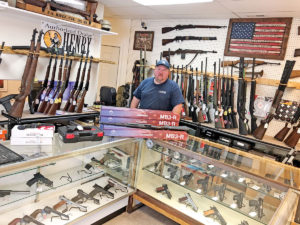 Joe McCreery has been a partner of Randy Ridgway at RR Gun Sales in Mitchellville for the past 10 years. Photo by Melissa Walker

Since he was a young boy, McCreery has enjoyed hunting and fishing and has used his own knowledge to help customers learn about
firearms and what to choose.

Experts say anyone who wants to start a gun shop or sell firearms should educate himself or herself as much as possible, be adept at using and cleaning guns, stay up to date on new products and trends, and know what new guns are popular and being manufactured.

A business plan and business background are also beneficial in operating a business. RR Gun Shop started with a small business plan, little by little, and McCreery says, luckily, things went well. They acquired their Federal Firearms License through the ATF to sell weapons and
underwent the appropriate background checks. They must reapply every three years.

For smaller, independent gun shop owners, their biggest competition are the big box stores that can afford to spend thousands or even
millions of dollars in advertising each year and have bigger inventories.

Gun shops also are required to have specific liability insurance. RR receives its insurance through the National Rifle Association, which is where they have found the best rates. The insurance covers theft of firearms, as well as the inventory.

Experts also recommend gun shop owners ensure they have all of the commercial licenses needed and follow any county or state
requirements for operation. The store needs to be kept secure, so an owner must have proper storage and security.

Prospective owners also are advised to first work at a gun shop to gain experience and learn more about the industry and the business side.
A visit to gun shows also can connect the person with other gun owners, help them learn what products sell well and give them an opportunity to talk to gun sellers. Those who own and sell guns can provide tips on how to get into the business or provide employment opportunities. ♦