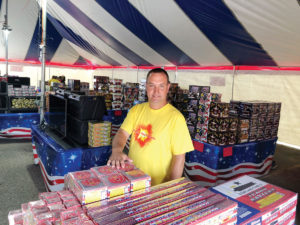 Jon Ide operates Big Bang Fury Fireworks in two tent locations,one in Clive and one in Polk City. He started the business to help raise money for retirement.

Two years after the Iowa Legislature opened the doors for the sale of fireworks within the stateâs borders,vendors say theyâre focused on how to make their
venture profitable and to set themselves apart from their competitors.

State fire marshal officials and vendors say most kinks have been resolved, as fireworks sellers continue to learn the tricks of the trade in this relatively new
business opportunity in the state. Some have started to get more technologically savvy, while others seek out better products for customers. 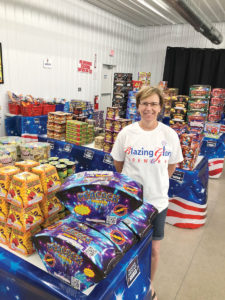 Carolyn Bradley and her husband, Mark, own and operate the Saylorville Event Center, which they convert into Blazing Glory Fireworks during fireworks sales
season.

Fireworks sellers are required to apply for and receive a license from the state in order to operate in Iowa. The cost of a sellerâs license ranges from $400 to $1,000 depending on the type and size of structure. Wholesalers pay a $1,000 license fee.

Chris McAninch has operated Shootersfireworks.com since 2017 in a building he owns in Grimes. He says the first year of sales was âan absolute nightmareâ as both vendors and the fire marshalâs office and inspectors tried to navigate the new terrain. He wasnât able to open his business until mid-June in 2017 and a week later in 2018, but everything seems to be smoothed out in 2019 with
his license being issued on April 1.

âIt was a learning curve for everybody,â he says.

The Iowa Legislatureâs action in 2017 made consumer fireworks sales legal for the first time in Iowa since 1938. Fireworks had been banned since that time after a fire caused by fireworks burned down a section of Spencer, in northwest Iowa.

Iowa law also requires licensees to provide proof of at least $1 million in commercial general liability insurance per location and cover the time period in
which fireworks can be sold. If a community group is selling the fireworks for a retailer, they can be listed on the retailerâs insurance, or the group can purchase its own insurance, according to the State Fire Marshal Division.

Initially, lawmakers tried to make the amount be $5 million, which McAninch says was hard to come by from insurers, based on his experience. He worked with a local lawmaker on the fireworks bill and was able to get the amount of required insurance reduced. 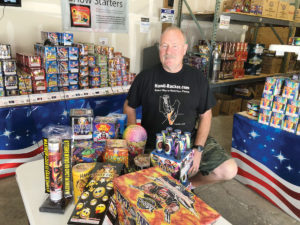 Chris McAninch opened Shootersfireworks.com in Grimes in 2017, the first year fireworks sales were legal in Iowa.

A total of 664 licenses were issued the first year fireworks sales were legal in Iowa, according to the State Fire Marshalâs office. Sellers said they were surprised at how well they did, with many needing to restock their supplies before the season ended.

In 2018, many say the market was too saturated and sales were down. The State Fire Marshal issued 791 licenses that year.

Sellers hope this yearâs sales will be back up and have taken steps to set themselves apart from their competitors. As of June 18, 576 licenses were issued
with a few more expected to trickle in, State Fire Marshal Dan Wood says.

Most, but not all, of these sellers are from out-of-state companies, he says.
Carolyn Bradley and her husband, Mark, own Blazing Glory Fireworks, which they operate out of their business, Saylorville Event Center in Des Moines. They opened in 2017 after working with friends who own a fireworks wholesalers business in Omaha. They also have two tent locations in Grimes.

Business was down in 2018 from the first year, Bradley says. She wasnât sure on the markup fireworks received, as she said her wholesaler pre-programs their cash registers for sales.

âWe had a lot left over last year because it wasnât as good of a year with all of the tents that went up,â she says.

Bradley says some businesses tried to price-gouge the first year that fireworks were legal in Iowa, but Blazing Glory sells its fireworks at prices comparable to Missouri prices.

Jon Ide, who started selling fireworks through tent locations with his business Big Bang Fury Fireworks in 2017, says he was shocked by how much he sold his first year. However, sales were down the second year. His two tents sold as much combined as one tent the first year. He hopes that buyers consider local tent owners over those from out-of-state companies that come in and arenât as invested in the community.

McAninch, in Grimes, will order for the upcoming fireworks season in September from a Missouri-based, family-oriented distributor who doesnât have tent sales. He based this yearâs order on his first year of sales. His distributor will have a demonstration shoot, where McAninch and other sellers can see the fireworks in action, grade them and make their purchases based on that.

He changed wholesalers after his first year when his distributor supplied a tent that started to compete with his friendâs fireworks business in Creston.

âI donât want to buy from my enemy,â he says of wholesalers who distribute to dozens or even hundreds of tents.

Get to know your buyers

A self-proclaimed pyrotechnician, McAninch began selling fireworks to combine pleasure and business. He says his interest in pyrotechnics sets his business apart from others because he only chooses âthe best products and name brands,â and has a wide array to meet all interests from novelty fireworks to large gram cakes and mortar tubes to electronic igniting systems. He also makes sure customers understand how to use the items they buy and how to keep the product safe.

McAninch spent months before the selling season getting the technology ready with barcodes that customers can scan on each product label, which then allows them to see a demonstration of the firework on either an Android phone or a television screen located inside Shootersfireworks.com.

âWe want to be able to educate our people and let them know what theyâre getting and help them build their show,â McAninch says.

He travels to a fireworks convention in August in Gillette, Wyoming, each year to learn from manufacturers and distributers about different products and make connections with sellers.

Ide also has a television screen set up for customers to see fireworks in action before they buy. He visits his competitorsâ tents and prices his fireworks to be the lowest.

âIâm doing high-end fireworks at the lowest price, and I hope to make up the difference based on what I sell,â he explains.

Big Bang keeps computerized records of its products and inventory, which Ide used to determine his order for this yearâs fireworks season. He purchases from Red Rhino, a wholesaler in Joplin, Missouri. He continues to research wholesalers and read reviews to determine which sell the best products. He also watches live demonstrations and online videos when choosing products.

âWe also talk to our customers, and they tell us what kind of stuff they want us to sell,â he says. âI enjoy selling to people. They come in excited, and they leave happy. Itâs a lot of fun.â

Ide can resupply his tents from his wholesaler, and anything he doesnât sell will be stored in a shipping container for the following season.

Vendors say fireworks have a long shelf life, as long as they are kept dry and away from flames.

Bradley says part of the reason she and her husband operate inside their building is so their products can be safe and potential customers can come indoors and take their time looking. Last year, storms damaged other vendorsâ tents, which resulted in lost product, she says. 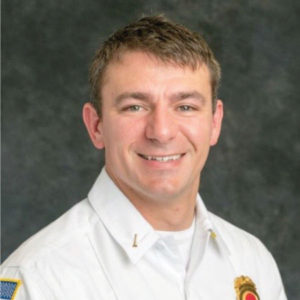 During an inspection, someone from either the State Fire Marshalâs office or a local fire departmentâs fire marshal will review the building or tentâs set-up and determine if it matches the plans that were submitted with the license. Theyâll ensure fire extinguishers are on site, exit signs and other signage are properly posted, and that products are set up appropriately. Tables must be a certain distance apart, and any fireworks that are out of their packages must have the fuses covered. Any tent locations must have a person located on site 24 hours a day, seven days a week.

The biggest safety concern is to ensure that there is no smoking or flame in the tent or building, Wood says.

The Bradleys, who operate Blazing Glory in Des Moines, attended a class offered by the State Fire Marshalâs office so they could learn more about rules and regulations.

Most fireworks businesses are open before they undergo their inspection. When the inspector arrives and notes an issue, the seller is required to fix it. Most items can be fixed on site in front of the inspector, Wood says.

Clay Garcia, the fire marshal for the cities of Windsor Heights and Clive, inspects the fireworks vendors for those two communities. This year, there is one tent location in Clive and two tent locations and one permanent structure in Windsor Heights. Only one has been inspected thus far, but all âhave done a good job following guidelines in the past,â he says.

Hundreds of items are checked, but overall safety of the structure and safety for customers is the top priority, he says.

Fireworks are a flammable product, so if one goes off, it will produce a flame that has the potential to light more, which is why there are separation requirements between products, and flammables have to stay away from the building or the tent, Garcia says.

âAs long as thereâs no flame to ignite the source, theyâre relatively safe as long as theyâre displayed correctly,â he says, adding that safety measures need to taken to ensure that is the case. âThe element of potential is great, but if the tent is maintained properly, and it meets all code, it is relatively safe. Thatâs why we, as a fire department and the State Fire Marshalâs office, require a lot from these buildings.â

Safety is important to Ide. The State Fire Marshalâs office answered any questions he had as he was getting into the business. Ide has a small homebuilding business and is using his fireworks sales to help save for retirement.

Ide operates a tent location in Clive and another in Polk City. He educates purchasers who come in on how to use different types of fireworks, so they stay safe. Heâs stocked a new type of sparkler that doesnât have the risk of burning users. Heâs also showing customers how to use an arc lighter, which he says has an electric spark instead of a flame and is safer for lighting.

âI enjoy selling to people,â Ide says. âThey come in excited, and they leave happy. Itâs a lot of fun.â ♦