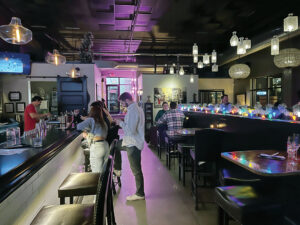 Craving a hand-crafted cocktail? The craft cocktail craze in the Des Moines area has steadily increased in recent years, with bars offering their shaken-not-stirred concoctions. However, one strong contender in the cocktail world introduced the concept long before any other bar when it first opened seven years ago â Juniper Moon.

Located at 2005 Ingersoll Ave., Juniper Moon offers a warm, welcoming vibe. Inside, it feels as if youâre hanging out at your friendâs eclectic apartment, lounging among comfortable chairs and couches. The different seating accommodations include bar-height and low-top tables. The crystal and unique glass lighting fixtures set the just-right ambiance.

On a Saturday evening, Christmas party patrons celebrated, along with a mix of neighborhood friends gathering for a relaxing evening. As a bar only, itâs refreshing to be around adults only and not worry about little ones running amok.

A highlight â besides the ambience â is, of course, the cocktails. With names such as Zac Saffron, Boulevardier of Wonka Memes, Rye Me Up Tai Me Down, lots of flavors are mixed into these drinks. 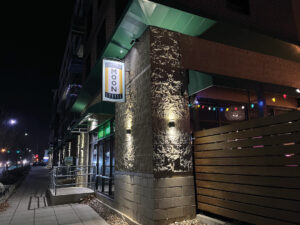 Jason Garnett, managing partner for six years, brings nearly 20 years of hospitality and cocktail expertise. Early on, he immersed himself in studying the recipes and flavors going into a cocktail. He offered his skills when the popular East Village restaurant Lucca first opened up. He says the concoctions benefit from a chefâs help.

Drinks cost from $10-$12 on their extensive drink menu. They also serve wine by the glass or bottle, as well as a variety of beers and traditional spirits. Garnett realizes not every patron wants a drink with more than two ingredients in it.

âWeâre here to meet the people in their cocktail journey. If you want to order Bud or Busch Light, weâve got that. Donât apologize for ordering a Busch Light. Weâre not drink snobs â we can do both.â 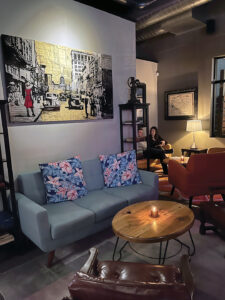 A phone booth in the barâs corner was used as a direct line to order Gusto Pizza, which was across the street. Gusto moved earlier this year, so they no longer serve pizza. They do offer charcuterie trays and snack mixes to munch on. Thereâs a nice patio outside to witness the action on Ingersoll and Martin Luther King Parkway.

As Juniper Moon was set to celebrate five years, the pandemic hit. They delayed their celebration and will be hosting a seventh birthday party this month.

If youâre looking for a drink before or after a Des Moines Playhouse show, a concert at Hoyt Sherman Place, a Drake athletic game or an Ingersoll bar crawl, Juniper Moon is a close neighborhood joint with a classy vibe. ♦