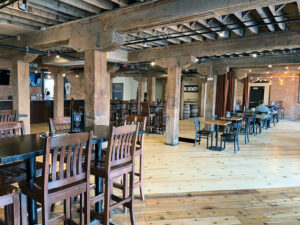 The former Garden Nightclub has been transformed into The Twisted Vine Brewery, an ultra-modern brewery in the budding Market District in East Village at 112 S.E. Fourth St. The interior of the nearly 150-year-old building was gutted, leaving wood and metal structures throughout the brewery.

The old dance floor and bar were replaced by low- and high-top wood tables and chairs. Barrels of brew are somewhat hidden behind the bar in the tap room.

A new outdoor patio boosts picnic-style seating for large groups of patrons. One recent evening, folks gathered on the patio, watching the fireworks after the last inning of the Iowa Cubs baseball game at Principal Park. Get a glimpse of the Iowa Capitol as well or listen to the trains rumbling by as you sip your brew. 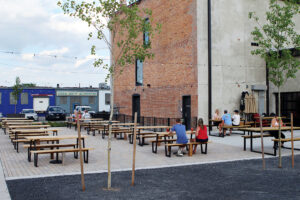 Garage door openers to the patio are easily closed to deal with Iowa winters and its other three unpredictable seasons.

The two bars and tappers were brought from the Twisted Vineâs former location in West Des Moines. The owners repurposed as much brewing and bar equipment as possible from the old location, where they had lost their lease.

The Twisted Vine, in the midst of a soft debut, just opened its doors in June. The local beer selection isnât quite up to full capacity, but they offered about 10 of their own beers, plus guest brewery and domestic beers. Thereâs a tapper room for up to 24 beers â so stay tuned, as several beers are in the aging process. 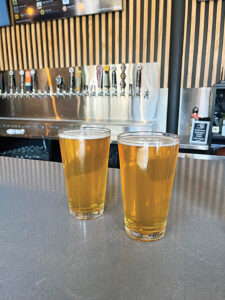 Twisted Vine currently offers about 10 of its own brews, plus other domestics and guest beers, ciders and sours.

Costs run from $5 to $8 per pint, including their popular brews, Bobâs Ale and Westown IPA. For non-beer drinkers, thereâs cider, root beer and cans of wine from local wineries.

Currently, thereâs no food. Theyâll soon have frozen pizza and snacks. They hope for a food truck rotation if they can work out space logistics. Live music on the patio or indoors occasionally entertains beer drinkers.

Ladies frequenting the Twisted Vine are silently rejoicing one of the barâs features. Walk into the brand-new womenâs bathroom and thereâs nine â count âem â nine bathroom stalls. In a bar. Trust me, this rarely happens, and this place gets a 10 for figuring out the bathroom dilemma, plus bonus points for it being spotless. Itâs a no-brainer: Less time in bathroom lines means more time (and money) to spend in the beer line.

The Twisted Vine, established 11 years ago, was the first brewing company to occupy a winery in Iowa at Madison County Winery. With seven partners/owners, five currently brew beer. Partner Ron DeGeest said they collaborate easily when brewing their beer.

âThereâs plenty of us brewing to get out some new beers,â he said. âEveryone has their own method and we bounce ideas off each other. If something doesnât go right with the beer, the others will help tweak it.â

DeGeest said he thought downtown Des Moines could become a brewing destination, as there are more than a half dozen breweries close by.

âWith the foot traffic and Single Speed coming, it will be like a small brewery row around here,â he said. ♦