Take a road trip to De Soto for food, drinks, music and a sense of familiarity. 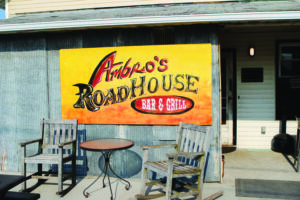 Do you ever walk into a new place that seems familiar, but you swear youâve never been there before? Or maybe it reminds you of a character-filled hangout from a movie or a road trip bar in another state?

Thatâs the vibe you get when you walk into Ambroâs Roadhouse. Itâs a restaurant and bar located off Interstate 80 and Highway 169 by the De Sotoprofit exit.

The outside resembles an old farmhouse with a couple mismatched rooms added onto the place. With 1980s country music piped in, the entryway feels like itâs fashioned from an old grain bin and rustic barnwood. Outside includes a big patio with picnic tables and an outdoor tent-covered stage.

A surprising treat was the music. Itâs generally offered Saturday nights along with bike night. On a Wednesday evening showcase jam, a full band set up for some rockinâ blues tunes, once again setting the movie scene, but without Roadhouseâs Patrick Swayze in the joint. 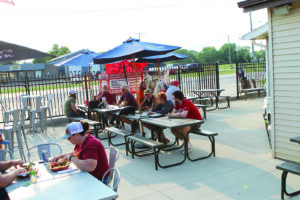 Music and bike night is on the agenda every first Saturday of the month through October.

The inside is small, but kitschy â with metal and neon beer signs, a music schedule poster, and Americana design on nearly every inch of the walls. A string of lights under the bar implies a celebratory theme.

Beers include domestics, anywhere from a Hammâs to an Exile Ruthie. Cocktails and seltzers round out the bar offerings. Various happy hour specials include two-for-one domestic beers and well drinks from 3-6 p.m. on Tuesdays. I imagined a couple rowdy patrons slinging shots of Jack Daniels for $1 off whiskey and wine night, but no. Instead, on this weekday, families ordered home-cooked food and sodas.

Their menu includes a daily special, such as goulash and chicken fried steak. Weekend breakfasts consist of hearty stick-to-your ribs biscuits and gravy, served with eggs, hashbrowns and all the fixins. 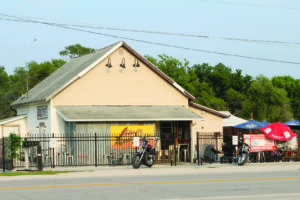 From a Hammâs to an Exileâs Ruthie, Ambroâs Roadhouse offers beer, cocktails and seltzers. Various happy hour specials include two-for-one domestic beers and well drinks from 3-6 p.m. on Tuesdays.

But most people come for the tenderloins. These hand-cut, pounded and breaded in-house loins topple over the bun. Get a side of poutine with thick potato slices, and you wonât leave hungry.

The owner is Amber Broeker, who opened the place in 2016. She says she always wanted to have a restaurant and bar of her own. Her dad owned a frozen custard business when she was a teenager. She worked as the head cook at Waukee High School for 10 years and bartended at other establishments, gaining valuable bar and restaurant experience.

The name Ambroâs comes from a nickname her brother gave her when they were kids.

âHe used to call me Ambro, since I was a tomboy and said I acted more like a brother than a sister,â she explains.

Because of the location, patrons from Adel, De Sotoprofit, Waukee and Des Moines have become regulars. People stop on their way back from visiting the Covered Bridges in Winterset. 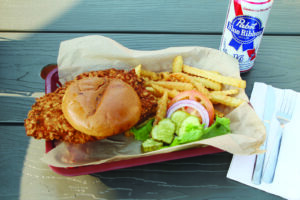 The Roadhouse menu includes a daily special, but most people come for the tenderloins â hand-cut, pounded and breaded in-house.

If youâre looking to get out of the city and the suburbs, take a road trip to Ambroâs Roadhouse. ♦