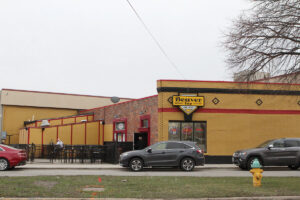 The Beaver Tap is located in the heart of Beaverdale. The local favorite is housed within the building that was formerly occupied by A.K. OâConnorâs and Bon Ton. Photo by Jackie Wilson

The Beaver Tap is located in the heart of Beaverdale, and its building has been a mainstay in the neighborhood for more than half of a century. As different bars have come and gone, today it continues to be a hangout for locals in search of a friendly pub and grub.

Since our last Belly Up review, the Beaver Tap now has a full kitchen, which opened in December 2020 after a management change. Its sister location across the street, Saints Pub and Patio, closed at the same time. The kitchen is now open, starting at 8:30 a.m. for breakfast, lunch and dinner. Menu items are similar to Saints and include pizza, burgers, sandwiches and appetizers.

On a recent Friday evening, the Beaver Tap included a mix of locals. One couple that lives a few houses down the street has walked to this location for years. Another patron, Karen, recalled several occasions when she visited the place âwhen it was A.K. OâConnorâs and the Bon Ton.

âThe Bon Ton used to be more lit up, and we watched people play pool,â she remembers.

âAfter a decade of being just a bar, we got rid of the pool tables to start fresh,â she says. âWe want to be more like the old A.K. OâConnorâs and serve food for all ages.â

The bar inside is well worn â with renovations in the works. An assortment of beer signs are displayed along the walls, and there are more than a half dozen tables and high tops for seating. An outdoor patio is a roomy addition. Bike nights will be offered this summer as the bike trail goes right past the joint.

Happy Hour, from 2-6 p.m., includes $1 off wells and draws, along with half-price starters. Local brews with a full bar offer thirsty patrons numerous beverage choices. While chatting with the patrons, it seems that nearly all of them live in the neighborhood or have that Beaverdale connection.

Mike Ketchum, for example, declared heâd been coming to the Beaver Tap for more than 10 years. Then he asked if Iâd ever seen a fat guy do the splits. I pondered whether it was a trick question and replied truthfully with a simple âno.â

In a matter of seconds, Mike was on the floor doing the splits while chugging his beer. No warm-up for this limber dude, and the seam of his jeans remained intact.

âI was blessed with this body,â he says. âI played baseball and slid into bases. Iâm a farmer, so Iâm limber.â

The bartender laughed, as Iâm sure sheâd witnessed his shtick dozens of times. It made for an interesting evening. As we walked out of the bar, no other acrobatics occurred. But on any other evening, it might happen again. ♦