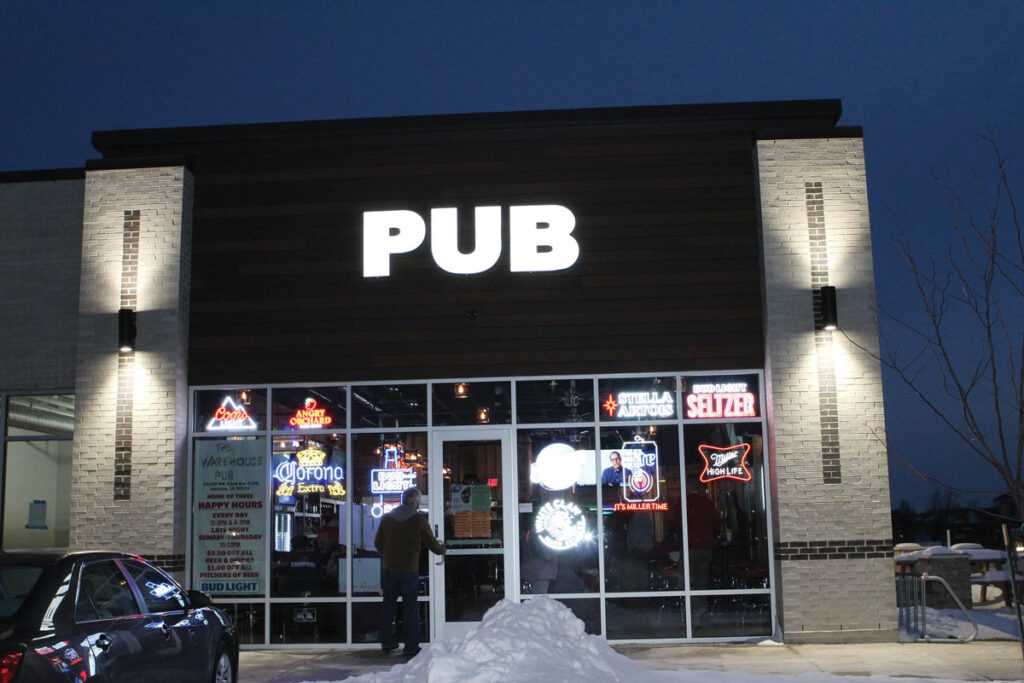 When seeking out a bar for Belly Up, I was intrigued with the name of the bar, the Warehouse Pub. Was this warehouse similar to big box stores that are loaded with gigantic bags of pretzels or oversized boxes of cereal?

Nope. But thatâs OK. The Warehouse Pub is a neighborhood bar in a new development off N.W. 62nd Street in Johnston. Tucked in a strip mall, the outside simply says âPubâ along with glowing neon beer signs in the window.

The Warehouse Pubâs grand opening was March 12, 2020, just four days before bars were shuttered due to the pandemic.

Never mind. The bar has bounced back, and, on a recent Friday evening, the bar felt cozy, even amid its spanking-new exterior. Unlike a warehouse, itâs actually just the right size with a dozen or so high-top tables and ample seating at the bar.

Speaking with patrons, pub goers included a mix of Johnston residents. Brady stopped by to say hi to a friend before heading to the basketball game at the nearby Johnston High School. Another gentleman says he frequently stops in for happy hour on his way home to Granger.

Warehouse Pub offers about 10 beers on tap, including several Iowa beers. With Iowaâs numerous breweries, nearly every bar in Des Moines metro should at least offer a few choices of a local brew.

Mixed drinks are decently priced with happy hour specials daily. On Tuesdays, choose from $3.50 Captain Morgan, Jim Beam, Bacardi and Smirnoff. Thursdays gets you Absolute, Crown Royal and Jack Daniels for $4. Sunday funday you can watch your favorite sports team and drink $7 pitchers of domestic beers. Or, if youâre trying to impress your friends, then spend the extra buck and splurge on a craft pitcher for $8.

Not sure what booze to choose from? Just look at the shelving behind the bar â it looks like a warehouse, and the bottles are stacked on steel shelves. Theyâve got a huge selection of flavored Smirnoff Vodka. By the way, did you know Smirnoff makes 39 flavors of vodka and, in 2019, was the best-selling vodka in the world?

Thereâs no kitchen, but there is a pizza oven for frozen Heggies pizza. If you havenât tried it, this pizza sufficiently satisfies that hot cheesy craving. Thereâs packaged salty snacks â most likely purchased at a warehouse â for those got-the-munchies cravings.

A patio provides casual seating with a breeze in the summertime.

If you need a warehouse fix, then the Warehouse Pub is the place to be. ♦