Urbandale couple creates a Christian board game to bring people and families together. 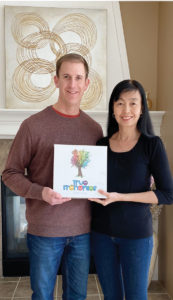 Derek and Lucy White created a Christian board game that they wanted, above all, to be fun.

If you walk into a local retailer looking for a Christian board game, you may be hard-pressed to find one, aside from the typical Bible trivia â but not anymore. Urbandale residents Derek and Lucy White, along with two local team members, have created and brought to market a unique, Christian-themed game full of intrigue, deception and strategy. It is called True Frenemies.

âIt is really surprising how few Christian games are available,â says Derek White. âConsidering 65 percent of the U.S. (more than 200 million people) self-identify as Christian, this is absolutely stunning. In light of that, we wanted to create something genuinely original and centered on the life and message of Jesus as presented in the four gospels (Matthew, Mark, Luke and John) that was not specific to any one denomination.â

The Whites have lived in the Des Moines metro since 2004. Derek is originally from Oklahoma and Lucy is from Jakarta, Indonesia. The couple met when White was working in Australia. They have a son, 14, and a daughter, 11.

The familyâs children were the catalyst for creating the game. After teaching a church class one Sunday morning in early 2018, Derek asked his kids if theyâd enjoyed the class, to which they responded, âNot really.â When White asked why, they responded, âBecause you talked too much.â

âThe topic for the series was âThe Decisions We Make,â and the follow-up lesson was âThe Friends We Make,â â says White. âI knew I needed a different way to teach the class. This is when the idea for True Frenemies was born. I went to work right away on the prototype using poster board, index cards, cut-up business cards and scavenged dice.â

After countless hours of play testing, refining and simplifying, a year flew by before the game was ready to go to print. White says talented team members helped bring the game to life. He and his wife worked with Chris Wells, a digital artist, and Dug Campbell, a graphic designer, to create the game board with multiple paths winding up a craggy mountain to the âTree of Life.â

True Frenemies is designed for ages 8 and older and for family fun, says White. The objective is to bring one other player along with yourself to the Tree of Life. The catch? You will know whom you need to help, but you will have no idea who is helping you.

âOn the surface, itâs a simple concept,â says White. âBut there is a deeper strategy along with an obvious metaphor. The person you most want to help may not only resist but actively undermine you every step of the way. But you must continue to help that person anyway.â
White says the response to the game has been strongly positive â although Lucy did think her husband had slightly lost his mind when he had a shipment of 5,000 games delivered to their home. With 18 pallets of games stacked in their basement, they are eager to market, sell and âreclaim their basement.â

âOur goal is to bring people and families together,â says White. âUltimately, our game is meant to unify as well as entertain.â