Tuesday, August 9, 2022
Join our email blast
At Home With

Home is where the history is 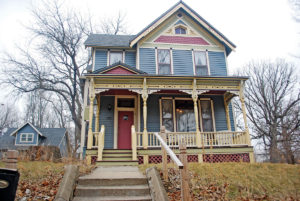 One-hundred-year-old secrets were discovered within the walls of one Sherman Hill residence, but the remodeling project that Lyn Loheed began three decades ago hasnât been all roses. When she bought the home, Loheed was 25 years old, single, and didnât understand the massive undertaking that her house needed.

âIf I had known how much work this house was going to take, I wouldnât have done it,â says Loheed.

Fast forward 30 years, and Loheed is still completing projects in the same Sherman Hill home. The homeowner is currently renovating the main entryway. But that is a breeze compared to her initial project of redoing the foundation.

Renovating her home is a hobby for Loheed.

âIâve worked in TV all my life,â she says. âThe news restarts each day. This is a continuous thing, and I can tear down a wall one day. It will still be gone when I come back the next day. It satisfies the other part of my soul.â

While renovating her home, she never would have guessed the treasures sheâd find behind her walls, including a piece of history that has given her insight into the house she lives in and of nearby Madison County. Buried behind lathe, plaster and three layers of wallpaper were 26 nearly-mint-condition copies of âHistory and Business Directory of Madison Countyââ from 1869. Before her find, only one copy was known to be in existence. 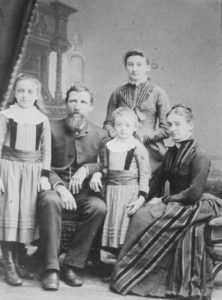 Lyn Loheed has learned a lot about the history of her Sherman Hill home, originally owned by the Levi Bender family, shown here.

âThese books were perfectly preserved in the ceiling of the dining room,â Loheed says. âWe were doing some work in there, and we felt something hard and heavy. We were shocked.â

After selling many of those books, keeping one for herself and donating one to the public library, Loheed and the home she loved began to get publicity from not only the neighbors but from television producers as well.

âThis house was on âIf Those Walls Could Talkâ because of all the things we found in our walls,â she says. âPeople continue to be interested in my home.â

This wasnât the only television appearance that this Sherman Hill home made.

âThe fireplace here was featured on a PBS special with Bob Yapp,â Loheed says. âBob redid the fireplace for me during one of his shows…for PBS.â

The fireplace she talks about is in her study, which is one of her many themed rooms with elaborately decorated walls. She has her study, adorned with flower patterned Victorian wallpaper, fireplace and bookshelf. In that room is a framed black-and-white photo of a family. It wasnât the Loheed family.

âLevi Bender was the original owner of this home,â Loheed says. âHis great, great, great nephew ended up at my front door with this photo of the original family. History found me. My address was written on the back of the photo.â

Not only had Loheed found the history of her home in its walls, but some of its history found her. This history is one reason that has made her want to restore other homes in the Sherman Hill area. Next year she hopes to move to another home in the area and restore it.

âThe home is an eight-plex, and it deserves to be a single-family home again,â says Loheed. âPreserving the past and the history of the area is very important.â ♦