Medium is the message 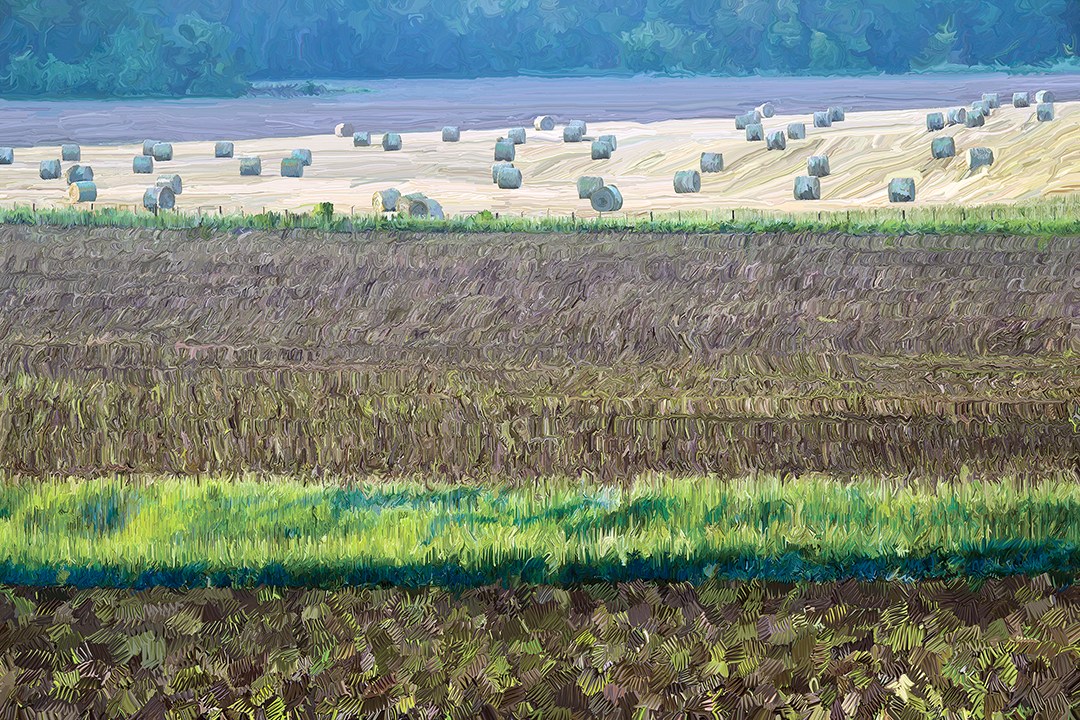 Karen Strohbeen and Bill Luchsinger have been creating joyful art in Iowa for more than 50 years, which reflects their surroundings and offers new perspectives within each piece, with the hope of energizing othersâ space with them. This way of enhancing or abstracting things we think weâve seen before allows the viewer to recognize newness, growth, change and detail in ways we might not have. And the use of color in their respective and very different representational digital paintings evinces sunlight and photosynthetic yields in the natural world, as well as architectural and sculptural gestures in the built world.

Bill Luchsinger and Karen Strohbeen open their annual show Aug. 12 at Moberg Gallery. The pioneer digital couple are Iowaâs most popular artists by several measures, including total works sold. They have been doing their distinctive thing for 52 years now, and they were ahead of even David Hockney in digital innovations.

Their loyalty to Iowa is grounded in black Hawkeye soil. The couple produced the long-time PBS TV series âThe Perennial Gardener with Karen Strohbeenâ from their home base in rural Madison County. Bill was the producer, Karen the on-camera talent. Karenâs popular flower drawings (she does not raise her brush/pencil from the canvas) now share space and time with Billâs urban and coastal visions. (They live half the year in the sponge-diving town of Tarpon Springs, Florida, now.) Thatâs why their shows are now in August rather than November. It does not matter much to the gallery count. It will be one of the most popular shows of the year.

At the Des Moines Art Center, âImages Unboundâ examines âthe societal impact of the endless amount of images that have entered our world since the invention and proliferation of photography.â The main point seems to be figuring out how the barrage of technologyâs image splash can be appreciated in a world where context is always changing, where, as Marshall McLuhan warned, âMedium is the message.â

Lots of montage are used to show how tentative context can be. âThroughout the 20th and 21st centuries, artists have explored the consequences and opportunities that arise when visual culture becomes untethered from its original context, helping us navigate a world where images are always on the move,â explains curator Mia Laufer.

There is no âAhâ piece in the show, and that might be the point â medium, context and timing are more important than any piece of art. As far as I know, this is the local debut of the Minnesota-based Native American artist Frank Big Bear, an Anishinabe and a 30-year taxi driver, long championed by Smithsonian National Museum of the American Indian and the Minneapolis Institute of Arts. He is included because whose perspective has changed more in 50 years than that of the Native Americans? Big Bear has painted the life journeys that Louise Erdrich wrote about. If you donât know Erdrichâs body of work, that was the highest of praise.

âBig Bear is best known for drawings made with Prismacolor pencils in which faces, figures and abstract shapes completely fill the picture space with a riot of color and activity,â explains Laufer.

Another personal favorite in this show is Walker Evans, one of the photographers who somehow made the Great Depression unforgettable in a kind and gentle way. If there is a star in this show for me, though, it is William Kentridge, who dares to contribute a series called âZeno Writing.â Zeno was a great inspiration for Kant, Kafka and Jorge Luis Borges. His cynicism-turned-Stoicism was immortalized by those gents, and these prints seem to argue his proposition on the impossibility of ever going from one place to another.

Steven Vail Fine Arts is alive and open for business. Just before COVID backstabbed the world, Vail was located in the Teachout Building. After his landlord and great friend Kirk Blunck was found dead under what the medical examiner called âsuspiciousâ circumstances in front of his gallery door, things changed. SVFA relocated to the Fitch Building, just in time to be closed by COVID âprotocols.â

The gallery has updated and relaunched their first Fitch show, âThe Show Must Go On,â adding âAnd On and On and On.â It will hang for one year, whimsically. As works sell, the show will add new ones. ♦