Modern Concepts at the DMAC 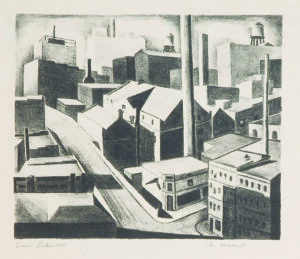 âModern Conceptsâ is a new print show at the Des Moines Art Center. The curator is Jeff Fleming, the retiring museum director. That is a rare thing, but Fleming said he loves the subject.

âModernism was both an approach to artmaking as well as a mindset that focused on the new,â he said. âThe movement in the visual arts came in many forms and depicted a variety of subjects.â

The artworks in this show, all drawn from the Art Centerâs permanent collections, illustrate four subject areas: abstraction, city life, figuration and landscape. Within each theme, there are examples of multiple approaches, from the use of bold expressionism to simplified shapes to vivid contrasts in color and tone. Political and social themes of the early 20th century are represented in a way that no longer seems confined to history â war, global economic and ecological concerns have awakened a century later. Modernism, it seems, is again a diverse contemporary arena in which to examine the world. Itâs also less sad than watching TV and the Internet images from Mariupol, Yemen and the U.S.-Mexico border.

Let us begin as the show begins, clockwise from the lobby. Fleming called abstraction the âhallmark of Modernism.â He said pure abstraction makes formal elements â like color, line and form â into the actual subjects work. Fleming cited Jackson Pollockâs untitled engraving, Lee Krasnerâs collage, and Joan Mitchellâs untitled screen print as examples of this approach. I felt that color dominated Hannah Hochâs âRotating Formsâ to the extent that they took over its narrative.

âGesture, movement, emotions and an inner view of the world are paramount,â he said.

Fleming said the second category is figurative abstraction, in which an object or figure is the subject.

âBut its form may be altered beyond easy recognition or converted into its basic shapes and colors.â He cited examples of this approach: Henri Matisseâs âLe Cirque,â from his âJazzâ portfolio, JoÃ¡n MirÃ³âs âPersonnage aux Ãtoiles,â and Paul Kleeâs âDenkmal des Kaisers.â That last print represents the Kaiser as a brute with a crown, somewhere between horrifying and hilarious.

âModernismâs focus on emotions and feelings, as well as an interior world, are readily apparent in abstraction,â Fleming explained.

Figuration held on to its relevance in this era. Itâs also the largest section of the show.

The Rivera print shows a woman overwhelmed by her head-held burden, one of those political themes. Karl Schmidt-Rottluffâs âMourners on the Shoreâ is unbearably sorrowful, perfectly expressed in the black and white edginess of a woodcut.

The Modernists were fascinated by the 20th century modern city and its lure to bring out both the best and worst of humankind. Edward Hopper accentuates its ability to dwarf and minimize people in his famous âNight Shadows.â Jeanne Mammen in âCarnivalâ creates a city scene that could serve as design for âCabaret,â with women enjoying a freedom of expression not known in smaller places or previous times. Emma Lucille Lukenbillâs âViaductâ depicts a neighborhood dominated by multiple water towers and smokestacks, the tradeoffs for the creation of modern cities. Reginald Marsh looks at the brute force of âSwitch Engines Erie Yard.â

Landscapes are the happier side of modern life. Thomas Hart Benton and Grant Wood, both Midwesterners, turn rural landscapes into statements about the indomitable force of nature. In Woodâs âMarch,â a wind moves a leafless tree to bend, as a farmer races his horses to a barn. Bentonâs âThreshing Wheatâ reveals the pure beauty of a crop defying the ugly smoke of modern threshing machines.

The show plays through July 31.