A superstar, a design star and a populist star 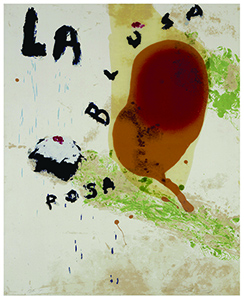 Julian Schnabel is a big deal.

When asked about his recent acquisitions of Julian Schnabel works, Steven Vail, of Steven Vail Fine Arts, responded, âThese are somewhat unbelievable to be offered in Des Moines. We have been receiving inquiries nationally and internationally and have several pending sales. Each is unique with the artistâs hand embellishment in addition to the artistâs base screen-printing work, thus giving them the status of âuniqueâ works on paper. Collectors in Berlin, Miami, Greece, Beverly Hills  and others have all been reaching out to SVFA in Des Moines inquiring about the work.â

In 1996, Schnabel wrote and directed the feature film âBasquiatâ about fellow New York artist Jean-Michel Basquiat. The film was in the official selection of the 1996 Venice Film Festival. Schnabelâs second film, âBefore Night Falls,â based on the life of the late exiled Cuban novelist Reinaldo Arenas, won both the Grand Jury Prize and the Coppa Volpi for best actor, Javier Bardem, at the 2000 Venice Film Festival. In 2007 Schnabel directed his third film, âThe Diving Bell and the Butterfly.â Schnabel received the award for Best Director at the Cannes Film Festival as well as Best Director at the Golden Globe Awards, where the film won Best Film in a Foreign Language. âThe Diving Bell and the Butterflyâ was nominated for four Oscars. Like we said, big deal.

Steven Vail Fine Arts featured a different contemporary female artist each week in March on their virtual tour to honor Womenâs Heritage Month. They are transitioning in May to an international theme. That will be seen at www.artsteps.com/view/5eefe9991b959012e2cbdddf.

The Des Moines Art Centerâs Iowa Artist exhibition this year presents two bodies of work by Olivia Valentine. An Iowa State professor of design, Valentine is best known for work in textile construction, drawing and sculpture, as well as textile installations that interface with architecture. The Art Centerâs Richard Meier building features âMediate/Equivocate,â a large-scale installation generated in response to Meierâs deliberate, gridded design. Embedded within the three-story wall in the buildingâs atrium is a series of ropes. Viewed from a distance, the ropes appear to be woven into the wall, in a pattern responsive to its surroundings. Additionally, the ropes drape over the top of the third story wall, cascade into the atrium space, and collect on the ground floor. This entanglement suggests the transformation of the wall from an indiscernible architectural element to an active, three-dimensional component of the building. In the I. M. Pei buildingâs lower gallery, âThe shadow is my bodyâ consists of low relief, small-scale plaster sculptures whose flat surfaces support watercolor drawings that resemble spilled liquid. Together these installations initiate relationships between architecture and textile structures â two traditionally gendered modes of spatial production. This show plays through May 16.

Des Moinesâ most popular artist, Chris Vance, is back with his annual exhibition of delightful characters, colors, shapes and hidden stories. At Moberg Gallery until June 12, this show can also be viewed virtually at https://moberggallery.com/exhibition/chris-vance-timeline. ♦