The Sacred and the Profane 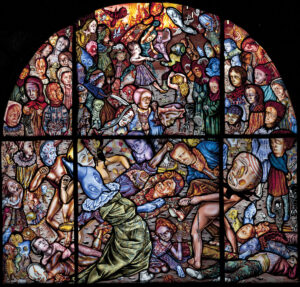 If you love the circus, you should have a good time at âThe Path to Paradise: Judith Schaechterâs Stained-Glass Art,â the first survey and major scholarly assessment of the artistâs 37-year career. Organized by the Memorial Art Gallery of the University of Rochester, the exhibition includes some 45 of Schaechterâs stained-glass panels along with a selection of related drawings and process material.

Since the mysterious disappearance of Hieronymus Bosch, art has rarely hung its hat on the gallows. Schaechterâs work reminds me of listening to a Bob Dylan song from the âHighway 61 Revisitedâ era, watching a Ken Russell film like âThe Music Loversâ or reading Danteâs âInferno.â Images come at you so fast, and landscapes are so crowded and busy with contradictions of overt craziness, that you canât possibly process anything without relistening, re-watching or re-reading.

Stained glass is most associated with religion and Louis Tiffany. The fact that it is the artistâs chosen medium forges her simultaneous band with both the sacred and profane realms. Her panel âFloristâ could be a meditation from Mircea Eliadeâs book âThe Sacred and the Profane.â The philosopher argued that that modern people, even atheists, still retain a little of the religious manâs feeling for the sacredness of nature, and that such positive feelings reflect the memory of a degraded experience of nature as sacred. Eliade concluded by considering the sacredness of stones, the moon and the sun. In this panel, Shaechter considers flowers, wild and picked. Itâs not a pretty story for the florist. The artistâs best known work, which was originally created for a penitentiary, is âThe Battle of Carnival and Lent,â shown here as a war between sacredness and profanity.

Many of these images are set on sideshow and burlesque stages. How better to present âSlut of the Year?â âA Play About Snakesâ is a phantasmagoric intertwining given a full stage. Even without stages, things are staged. âNew Ghostâ is set over modern Berlin. âDream of the Fishermanâs Wifeâ seems to be a parody of Botticelliâs âBirth of Venus.â She seems to have managed to dream up Venusâ breasts and hair color but nothing else is even close to the goddess. âNatureâ shows a woman on a divan. âHorse Accidentâ is far worse for the rider than the horse. âHemophiliaâ force feeds the viewer with the terrible beauty of tragedy.

The old circus, before political correctness and PETA, has delighted few artists since Federico Fellini retired his directorâs chair. One panel presents the parade of circus apes on motorized vehicles. âMy One Desireâ gives a young maiden the gift of laying with a unicorn. The drama of the circus is portrayed in images like âLucifer Poopsâ revealing the old trickster, in the pose of Rodinâs âThinker,â dealing with modern plumbingâs incompatibility with large tails. It is surrounded by 14 other images, including a creature eating an ice cream cone.

Drama is heightened in âBeached Whaleâ by so much blood in the water that even the sky looks bloody. âBirth of Eveâ is made mysterious by wondering how she emerged from flowers. The artistâs self-portrait reveals an awkward little girl with ruby slippers, a huge lollipop and a car on fire.