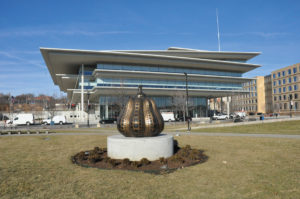 The local art scene experienced a star-studded year in 2018. Two of the really big names in world art visited the Des Moines Art Center for exhibitions of specific areas within their bodies of work. First, Sterling Ruby came for the opening of âSterling Ruby: Ceramicsâ a show that will also be taken to the Museum of Arts and Design in New York and the Nasher Sculpture Center in Dallas next May.

Ruby works in sculpture, painting, clothing design, stoveware, public art, salvaged submarine art, ballet set design, quilts, ceramics, video, urethane casts, and several other forms. Everything he does is supersized. The ceramics were certainly impressive that way. He revealed here that he canât throw anything away. He keeps all his mistakes and outcasts so that he is âsurrounded by everything I have ever done.â He incorporates these old friends in the ceramics. He called those âinformative explosions of things from the past into new works.â

He also told a Des Moines audience that kilns fascinate him because, better than anything else, they define the moment âwhen malleability becomes frozen.â He has to build his own kilns to fire the gargantuan-sized ceramics he showed in Des Moines.

Later in the year, the great German painter Neo Rauch showed up for the opening of his first-ever exhibition of his drawings. Those were salvaged from his studio floors in Leipzig by DMAC Director Jeff Fleming.

The museum also displayed a group show called âWanderlust: Actions, Traces, Journeys 1967-2017.â It featured a number of pieces, by artists from all over the world, mostly about futility, oppression, capitalism and political correctness.

In celebration of a new Yayoi Kusama sculpture at the Pappajohn Sculpture Park, the Des Moines Art Center exhibited four other Kusama sculptures at the museum. Kusama, celebrator of feminism, counter culture, polka dots and pumpkins, is an icon of the 1950s and 1960s who still is working today.

The DMAC print gallery showed a collection of works by Grant Wood. âSultry Nightâ featured prints that Wood did for Associated American Artists in the 1930s. That group sought to sell inexpensive prints through department stores and mail order catalogues. Woodâs prints were originally priced at $5, and he did 19 for the program.
The Print Galleryâs most fascinating exhibition of the year was âWomenâs Work.â That show included Winslow Homerâs Civil War nurses and factory workers, Barbie, Isadore Duncan, Diego Riveraâs âMarket Women,â Camille Pissaroâs âHay Teddersâ and Jean-Francois Milletâs âShepherd Girls Spinning.â It chronicled a century and a half of attitudes about what kind of work is appropriate for the fairer sex. Eduoard Manetâs âOlympia,â a print of the great Impressionistâs most famous and controversial painting, was rife with symbols of 19th century prostitution and with self-esteem.

The gallery scene was highlighted by Mobergâs 15th Anniversary show and a show that returned Ellen Wagener to Iowa at Olson-Larsen. That superb landscape artist has been celebrated by the Smithsonian Institute for her paintings of weather-ravaged places. Moberg also featured several eclectic works by Gary Kelley, probably Iowaâs most eclectic artist having worked in media as diverse as U.S. post stamps and murals.

Known for his murals of famous authors in many Barnes & Noble stores, Kelley recently did a series of some 70 murals for the remodeled Barnes & Noble on Fifth Avenue at 48th Street in New York City. Most recently he completed a mural for Googleâs new data center in Council Bluffs. In it, Kelley connected images of Council Bluffâs early communications and data history â the cooperation between Lewis and Clark and the native Americans of their time, the building of the railroad and the telegraph â with the new data center of contemporary times. Itâs amazing how much aerial views of rail systems look like computer hardware. ♦