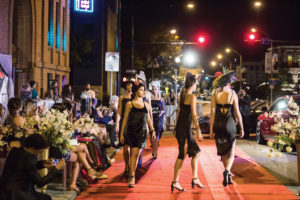 Des Moines Fashion Week returns the first weekend of October. The four nights of stylish events will be hosted at Mercedes Benz, Splash Seafood and the World Food Prize headquarters. Street wear, elegance, evening wear and a grand finale event are scheduled. This thing gets bigger every year.

Fashion Week is the brainchild of Camille Renee â the petite dynamo is a protÃ©gÃ© of the late Kurt Blunck, himself a charismatic and controversial figure who led the preservation efforts in East Village. Reneeâs success has generated resentments and jealousies. This is the modeling and fashion world, after all. After featuring her in previous issues, we received angry messages claiming, among other things, that Renee â a Cambodian-American â was trafficking in sex slavery. No evidence was presented, and most messages were anonymous.

I asked her about this. She said she was not surprised, but that she has received so much positive support here that she lets the ânasty stuffâ roll off her back. Previous DSMFW events have left me with a feeling of amazement at how cosmopolitan Des Moines has become in the last decade or so.

The other big event in the October art scene is the opening of the Neo Rauch exhibition at the Des Moines Art Center. Unfortunately, because that show opened after our deadline, we canât tell you anything more about it than we did last month. Rauch was orphaned at a young age in East Germany and has become a world-renowned painter and one of the richest men in Germany. His show here is the first showing in America of his drawings. DMAC Director Jeff Fleming found that Rauch was discarding his drawings on his studio floor. A show was born.

Vail comes down to earth

Steven Vail Fine Arts moves this month. For decades, Vail has had galleries high above the streets, in skyscrapers (insurance companies like that) and in the Teachout Building. Vail does not really need walk-in traffic. He does most of his business with New York investment brokers and in appraisals. But an opportunity arose, and he is coming down to street level, across Walnut from Exile Brewery. Hereâs his official explanation:

âThe architecture firms Spiller and IDEAA converted a dim, dark raw space on the ground level of Des Moines Fitch Building into a beautiful, lightfilled gallery. Located a block from the John and Mary Pappajohn Sculpture Garden and sheltered from the cityâs chaotic streets, Steven Vail Fine Arts â Project Room is comprised of a main exhibition salon, an art research library and an auxiliary exhibition space which will feature works from our collection. Executed
by Christensen Development, the finished gallery is a beautiful, modern space that offers a retreat from the hustle and bustle of city life.â

Mending Fractures: New Work by Lee Emma Running and Kim Hutchison opens Oct. 12 at Olson-Larsen Galleries. The show celebrates the artistsâ unique visual representations of repurposing and giving discarded objects a new life. Hutchisonâs collage and assemblage works are often about creating for the sake of creation and the challenge of using materials such as fabric, paper, paint, and drawing tools in order to give cast offs new context. Runningâs creations investigate the beauty and complexity of natural phenomena. Recently, Running has been focused on environmental implications and natural causes that result in incomplete deer skeletons found in the landscape. The
show runs through Dec. 1. ♦