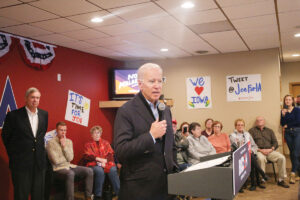 President Joe Biden speaks in Carroll before the Iowa Caucuses. He campaigned across Iowa with Tom Vilsack, the nominee for U.S. secretary of agriculture and a Biden friend. (Photo Courtesy of Carroll Times Herald)

In incoming U.S. Secretary of Agriculture Tom Vilsack, Iowa has not just an experienced hand leading a federal agency vital to the Hawkeye Stateâs economy, but he is a close adviser and friend of President Biden.

We saw the genuine connection and affection between the Bidens and Vilsacks as they campaigned before the Iowa caucuses in Carroll and Denison, eating breakfast together, chatting comfortably. There is trust and loyalty there, which is essential on many fronts for Iowa, notably agriculture and rural policy, which Tom Vilsack helped craft for the new president.

Vilsack is an Iowan, and he will be there for us as we make the fierce case for preservation of the Iowa Caucuses.

Having the presidential nominating process start in a state with a substantial rural population makes sense considering the political map and challenges for the Democratic Party, Vilsack said in an interview with this newspaper before the election.

In particular, the Senate depends on the Democrats performing better in rural America.

There is the advantage of momentum. We have the first-in-the-nation caucuses. Another state will have to jump the line, maneuver in front of Iowa. And other states generally fall flat after falling all over themselves with colliding jealousies and self-interest.

OK, Democratic National Committee, want to change the nominating schedule and knock Iowa out of the top slot?

âIf you want to get rid of the existing system, what do you replace it with, and it is not easy to replace it,â Vilsack said. âTo me, probably the best thing going for it is that it is really hard to come up with an alternative system, and the system we have now in terms of the schedule is a pretty good one because it starts in small states. It gives retail politicking a chance. It allows the Pete Buttigiegs and Andrew Yangs and the Beto OâRourkes, and all those folks who came to this state, it gives them exposure. We get to know them. It may not give rise to a president, but it could give rise to a cabinet secretary.â

The latter is certainly the case with 2020 Iowa Caucuses winner Pete Buttigieg, now the transportation secretary.

Iowa still places a value on flesh-pressing visits with people, not just money.

âYou donât want it to get to a point where it starts in California or New York where the ante is $100 million,â Vilsack said.

Itâs also going to be harder now for Democrats from other states to point to Iowa as not diverse enough for its place on the nominating calendar.

Iowa Democrats elected diverse voices to top leadership ranks with Ross Wilburn, a state representative from Ames who is African American, earning the chairman of the state party Saturday, Jan. 23. The partyâs first vice chair is June Owens, an African American who has held that position since 2019.

Both Democrats are respected Iowans and will be estimable ambassadors for the party and the state. They now face their most important task for Iowa.

One of the last questions I asked President Barack Obama during an interview in his second term was this: Would he consider locating his presidential library and museum in Iowa? Itâs not a silly or throwaway question, and the president answered it with great seriousness, because it is in our state, within our early-nominating vetting, that Barack Obama rapidly matured into the nominee, and eventually, the leader of the free world. The best-selling first volume of his memoirs features Iowa prominently.

Iâm also confident that Iowa Republicans and Democrats will, even in this toxic environment, see the common cause of preserving the Iowa Caucuses as it gives rural America, largely left behind by Big Tech and the modern economy, a voice with policies like renewable energy development.

Iowa GOP Chairman Jeff Kaufmann gets this. Heâs a smart operator who understands it is his job to fight for the Democrats on this, but obviously not his responsibility or fault if the Democrats lose the caucuses.

âSome people probably thought it was bizarro world while I was out there doing interview after interview after interview trying to explain what happened with the Democrats and making sure people understood that what happened was not endemic in their process,â he said, according to The Des Moines Register. â… The Iowa Democrats got some stuff rammed down their throat, and they got it rammed down their throat from the national DNC that had predisposed notions to not like our caucus and our status.â

Even if the Democrats bail on Iowa, the Republicans are expected to keep us first.

U.S. Sen. Tom Cotton, R-Arkansas, a stalwart supporter of former President Trump, is widely regarded in political circles as a likely Republican candidate for the presidency in 2024. His stock is going up in my view as well. In an interview with this newspaper, Cotton said Iowa should retain its first-in-the-nation status for the presidential nominating process.

âI think itâs a great tradition,â Cotton said. âIowans have proven themselves time and again to have very discerning judgment in our presidential primaries and caucuses, and I see no reason why we would change that.â

Until other states can rally around a new first state, and I donât think they can, Iowa retains the status for both Republicans and Democrats. ♦