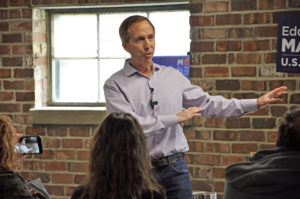 In an announcement speech in Carroll, where Mauro, a Des Moines insurance man and former high school baseball coach who enjoys deep family roots, the Democrat, who said he respected Ernstâs years in the National Guard, said serving in Congress requires a âdifferent kind of courageâ than the military demands.

Asked to clarify his comments in an interview, Mauro doubled down on the observation.

âWhen you serve in the military, youâre in line, you fall in line, people tell you what to do, you say, âYes sir, no sir, yes maâam, no maâam,â and you continue to do that,â Mauro said.

Mauro said Ernst, elected in 2014 and considered as a vice presidential running mate for President Donald Trump a little more than a year later, is continuing to take orders as a subordinate to higher command. Only this time, Ernst is deferring to superiors in her party and even among monied special interests, Mauro said.

âAbsolutely, sheâs taking those kind of orders as a U.S. senator from the Koch brothers, from Republicans,â Mauro said.

Ernst, the first female combat veteran to serve in the U.S. Senate, commanded a company of 150 soldiers in the military in Kuwait and Iraq and retired as a lieutenant colonel after 23 years in the Iowa Army National Guard.

âItâs extremely offensive to combat veterans especially, but to all veterans,â Thompson said, adding that what Mauro said plays into a false stereotype about veterans not having the mettle or education for certain civilian pursuits.

âThis is just a general pushback from the other side of the aisle to try to push back on military service as a credential,â said Thompson, who represents Greene County and part of Boone County in the Iowa House.

Whatâs more, Thompson said, Mauroâs assessment of Ernstâs service is plainly inaccurate as she led troops in a combat zone, giving orders as well as taking them.

David Oman, Ernstâs 2014 campaign finance chairman and a former state GOP chairman, said the Red Oak Republicanâs military service is a defining feature of her public life, both in the Senate and before her election.

âJoni led the largest battalion in our stateâs National Guard during the Iraq war,â Oman said. âYes, she received orders, but she also issued orders. And she brought her troops home to Iowa safely.â

Oman said populating Congress with military veterans like Ernst is essential for national security and intelligent use of force abroad.

Political Mercury columnist and Iowa newspaperman Douglas Burns, who has covered Congressman Steve King for two decades, has released âKing Kong Krazy,â a new 150-page book of columns and writings chronicling the antics and outrages of the Kiron representative. Many of the columns have appeared in Political Mercury, but many have not, as they stretch back to 2002, well before Burns started writing Political Mercury for CITYVIEW in 2008.

The book is available in paperback and as an eEdition through the independent publishing house, Lulu.com â where books can be ordered. All proceeds will go to boost the Carroll Times Herald, a family-owned newspaper. The book will be available soon on Amazon. To purchase books today, login to Lulu.com. ♦