She backs reparations for slavery in the form of $100 billion. 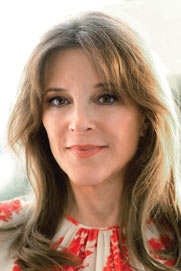 Itâs why the high-profile author and lecturer â a well-known guest on the âOprah Winfrey Showâ â is running for the presidency. Williamson â who has racked up 2.6 million followers on Twitter â is part of a growing field of Democratic candidates for the White House. She’s already a regular in Iowa.

âIs there any presidential candidate who is not seeking to do well in Iowa? I canât imagine that,â said Williamson, who is moving to an apartment in Des Moines.

Known best for her book, âA Return To Love,â and an author of 13 books, including four New York Times bestsellers, Williamson, a Houston native, blends a raft of progressive policy proposals and something of a conservative approach to change, which she believes comes from individuals improving their own outlooks.

âI believe that we transform a country the way we transform a life, not by changing things on the outside but by addressing underlying issues that caused the problems to begin with,â Williamson said in a phone interview with CITYVIEW.

Conservative and liberal ideas can exist in harmony, she said.

The problem in America today, Williamson said, is an âauthoritarian corporatism,â which she said undermines basic values. The American system is geared for short-term profits for a few people, she said.

âThere is a great disturbance, I believe, in the hearts of many, many people,â Williamson said. âWhat we need is a moral and a spiritual awakening. We need that kind of interaction in our hearts before activism will be able to override this. I believe that there is a moral rot that underlies political corruption.â

One of Williamsonâs most aggressive proposals: she backs reparations for slavery in the form of $100 billion â $10 billion annually over a decade â going to fund educational and economic initiatives determined by an âesteemed council of African-American leaders.â She thinks that makes more sense than distributing the money to individual African-Americans or people with slavery in their genealogy.

The land and livestock, in most cases, was not provided or it was taken back, she said.

âI donât believe the average American is racist â I donât,â Williamson said. âBut I do think many Americans are uneducated, just under-informed about the history of race in America, the fact that two-and-a-half centuries of slavery was followed by another 100 years of the violence of white supremacy, lynchings.â

The once-enslaved population has not been able to get its foothold in the American economy, she said.

âIâm talking to the American in all of us,â she said, adding that every generation should work to heal and repair the immorality of slavery. âI think that there are millions of Americans who understand that when you have an underlying wrong, that the forces of the universe will not support you in a new beginning until you admit the nature of the wrong, atone for it and make amends so that you can begin again.â

Williamson advocates free college and community college â and wants to change bankruptcy laws so that people who declare it can be relieved of the obligation to pay back student loan debts.

On gun issues, Williamson wants to prohibit the sale of assault rifles and semi-automatic weapons. For such weapons that are already owned, Williamson is considering how to handle them. She did not rule out confiscation of certain firearms when asked directly if she would grandfather in gun owners who possess weapons that would fall under a sales prohibition.

âI would do as president what Iâm already doing, and thatâs talking to very smart people who have a lot of ideas about that subject,â Williamson said. âItâs complicated, and I donât have in my own mind a final decision of how we would handle, how I would propose that I would handle that as president.â

Overall, the nation is moving toward more restrictions on firearms, she said.

On agriculture, Williamson said large corporate interests have been allowed to control too much of the production process.

She unsuccessfully sought a California congressional seat in 2014. But she thinks her background makes her more suited for the presidency than the elected officials who are running for the White House.

âFor the last 35 years, my work has been the work of an entrepreneur â not only my 13 books that Iâve written, but online classes, seminars, all of that,â Williamson said.

The president doesnât sit down and balance a checkbook for the nation, she said.

As for the current occupant of the White House, Williamson â who spoke to CITYVIEW from a phone in her apartment in New York City â said she prays for President Donald Trump regularly.

âItâs funny, it became a national joke when Sarah Palin said she could see Russia from her backyard,â Williamson said. âWell, actually, I can see Trump Tower from my window right now â very funny.â

(Palinâs exact comment in 2008 on ABC News about Russia was: âTheyâre our next-door neighbors, and you can actually see Russia from land here in Alaska, from an island in Alaska.â)

Williamson stressed that she really does pray for Trump.

Where Trump has harnessed fear, Democrats must reach for dignity, Williamson said.

âIf all we do is defeat President Trump in 2020, its very naive to think thatâs going to miraculously solve every problem,â Williamson said. âThe opponents of democracy today have so many people lined up behind him.â

Williamson, 66, is Jewish. She said she uses a course with âChrist-centered languageâ on forgiveness.

âI write and talk about Jesus, about the Holy Spirit, about all these terms that are traditionally associated with the Christian language,â she said. ♦