You are clicking to your enemy

And he doesnât speak Spanish

Never in the annals of human history has a gay man so brilliantly wooed a straight woman.

Apple CEO Tim Cook and other forces at the tech Goliath, the latest apps and wizardry in hand, seduced our governor with the siren song of Siri, boosting Waukeeâs already-winning economy with $213 million in local and state incentives for a data center.

Then there is Amazon, rivering in all directions, with predatory jungle eyes. Who can Amazon run out of business next? Your business margin is Amazonâs next opportunity, goes the smart-money reasoning.

The enemy of rural Iowa is not the El Salvadoran refugees the president wants to deport or the faces of diversity Congressman Steve King canât bear the thought of seeing anywhere except in his rear-view mirror on a southbound train going anywhere.

Thereâs a delta every dawn between Steve Kingâs thinking and the reality of life in rural Iowa.

When you get to the place in life where you are pointing fingers at those with less than you, the people farther down the socio-economic ladder, you are, in reality, someone elseâs mark.

Thatâs where rural Iowa finds itself now for Big Data and tech titans who know where and when you shop, what you buy and the details of searches on medical maladies and sexual curiosities you thought were secret â because, you know, you did them at night, and then âerasedâ your Google history.

Amazon and Facebook are greedy for our clicks, but decidedly urban, and even coastal, in their spreading of the new economy. The goods sold on Amazon, the jobs lost as a result, are not replaced with modern careers in rural Iowa. They go to Silicon Valley or New York City or Austin, Texas.

We Iowans canât even tax the products peddled to us online thanks to an outdated 1992 Supreme Court decision â which, according to Larry Davidson, president of Davidsons, a menâs clothing store in Roanoke, Virginia, creates an ecommerce-advantaged playing field where local brick-and-mortar merchants collect sales taxes that their online competitors donât.

âThrough this, the court essentially created a corporate welfare program for online-only retailers â some of which are now digital giants â that has stood for a quarter-century,â Davidson writes in a Washington Post essay.

The state of South Dakota is asking the Supreme Court to intervene and level the playing field, holding online merchants to the same tax standards. We should be rooting for our neighbors to the north.

We arenât just fly-over country to the tech elite. Thatâs old hat. No, today, the Technorati are perched on a virtual Mount Olympus, built with aimless and unthinking clicks from mere mortals like us. Weâve literally financed their belief that they can collect and centralize all the money in the world on their way to reshaping life in the image of their greatness.

That future, of course, doesnât involve any aspect of rural Iowa life weâd recognize or want. The little people, well of course, we will be content to house Big Techâs data centers. Cheers to you, Kim Reynolds. Thatâs what Big Tech will leave us after closing our stores and putting us on a trail of tears into the ecommerce reservations of modern man.

Our leaders, King and Reynolds, are picking on migrants, folding to flattery, as we rural Iowans become an endangered species, killed off by our own Facebook-inspired narcissism.

Who needs roads and schools when you have friends and followers? ♦

Senator concerned warm embraces of constituents, others, may be misinterpreted in tense climate

U.S. Sen. Joni Ernst, an old-school rural populist with a folksy approach to retail politics, says sheâs suspended the practice of giving hugs â gestures that have been primary features of her small-town way of greeting constituents and others in professional settings â for fear the embraces will be misinterpreted in the #MeToo era, the modern climate of evolving protocol on personal interaction.

Ernst, the first female combat veteran to serve in the U.S. Senate and a fierce advocate for justice for victims of sexual assault in the military as well as improved workplace environments for women in general, expressed misgivings about the #MeToo movement, suggesting it may snare or smear innocent or well-intentioned people simply seeking to project platonic warmth â like she has done with hugs. 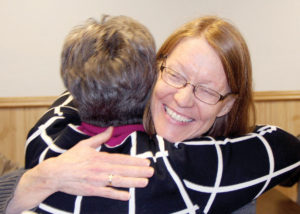 âI do have concerns now that a pat on the shoulder might be taken the wrong way,â Ernst said in an interview with this newspaper. âItâs possible that you could be accused of something. You know, Iâm a big hugger, and I love to hug people, and thatâs just who I am, and I have given pause to that now, even. I donât like that. But I donât want to be accused of hugging somebody who didnât want a hug. So, itâs unfortunate in some aspects.â

Ernst, 47, made the comments following a business tour of Lake City the other day.

There, she shook hands with dozens of people, including one economic-development official whom she has greeted with hugs on numerous previous occasions since becoming the first woman elected to Congress from Iowa in 2014.
Ernst, raised on a farm and a product of rural Iowa, has used a politically potent blend of broad, room-filling smiles, firm military handshakes and hugs, sometimes quick and others more sustained, to greet constituents at businesses, town halls and other gatherings in Iowa. She visits all 99 counties each year, as does one of her mentors, U.S. Sen. Charles Grassley, R-Iowa.

Ernst is on a first-name basis with many small-town city officials, business leaders and news-media members, and sheâs mixed in hugs with many of them at west-central Iowa events over the past five years.

Big picture â reporting, from women and men who have been victims of sexual abuse or harassment, is essential, said Ernst, a Red Oak Republican, adding that she gives âkudosâ to survivors of such actions who tell their stories.
âThe #MeToo movement, I think, has been very important, because I do believe we are seeing more now where people are willing to talk about issues of abuse that they have gone through,â Ernst said. âIt is raising awareness, I think, with a lot of women out there that maybe they were afraid to say something. Now, itâs OK to say something. And I think thatâs important.â ♦